Review: Robert Aickman: An Attempted Biography by R. B. Russell

This review was published in Phantasmagoria magazine #21 August 2022 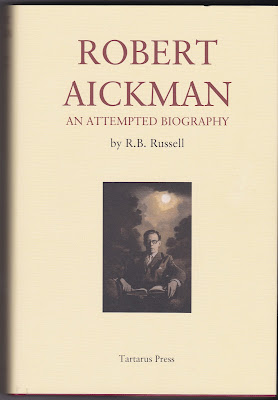 Ray Russell’s highly readable biography of Robert Aickman gives an unparalleled glimpse into a life that contained more psychological complications than is usual even amongst authors of “strange stories”. It is a life full of contradictions, not least being the unreliability of his own version of events, to the extent of omitting any mention of his wife of fourteen years in his two autobiographies. And his dislike of technology, “experts” and our modern age was so strong that he never owned a radio, television or a car. Instead, living in London he frequently attended theatres, opera and the ballet, and for quite some time wrote opera reviews.

Robert Aickman: An Attempted Biography is a warts and all biography, which is not, I must confess, what I expected from Tartarus Press, which has published Aickman’s entire opus over recent years. All credit to them and to Ray Russell for being unflinchingly objective in the biography of a writer whose writings he and Tartarus Press obviously value immensely.

It is a fact that throughout his life Aickman’s uncompromising views on so many things caused him to have some bitter enemies, such as L.T. C Rolt, with whom he co-founded the Inland Waterways Association in 1946, and who Aickman successfully worked with for many years until an intractable divergence of views on what the objectives of the IWA should be caused a lasting rift. Indeed, it was so bad that at a dinner party in 1974, shortly before his death, Rolt claimed Aickman was “the most evil man I have ever known.” Which is a sad reflection on how their long-time collaboration had descended into such acrimony.

Alas for Aickman, Rolt was not the only enemy he made, and it’s suggested this was why, despite all the work he put into the IWA, Aickman never received any official recognition in the form of some kind of honour, whether an OBE or a knighthood.

Of course, for most of us, Aickman is mainly known for his stories. Significantly, although he wrote extensively for the IWA, it was only when he developed a relationship with the writer Elizabeth Jane Howard the first of the stories he became famous for saw publication, when they co-authored the collection We Are for the Dark. Even then books of short stories by little or unknown writers were rare and it saw publication by Jonathan Cape only because of Elizabeth Jane Howard’s earlier success with her novel The Beautiful Visit, which Cape had published. The collection was made up of six stories, three by both contributors, though who wrote which was not revealed at the time.

Since then, of course, numerous collections of stories by Aickman have been published over the years, and for quite some time he was the highly respected editor of the Fontana Book of Great Ghost Stories. He also went on to receive recognition within the genre and was awarded the prize for Best Short Story for Pages from a Young Girl’s Journal in 1975 at the First World Fantasy Awards in Providence, Rhode Island, though unfortunately he was unable to attend. For some reason his visa was declined by the United States. The following year he was Guest of Honour at the British Fantasy Society’s annual convention, FantasyCon.

Unfortunately, Aickman’s distrust of experts and modern technology led him to refuse chemotherapy when he was diagnosed with cancer in 1980, preferring instead to take homeopathic remedies. He died the following year aged 66. 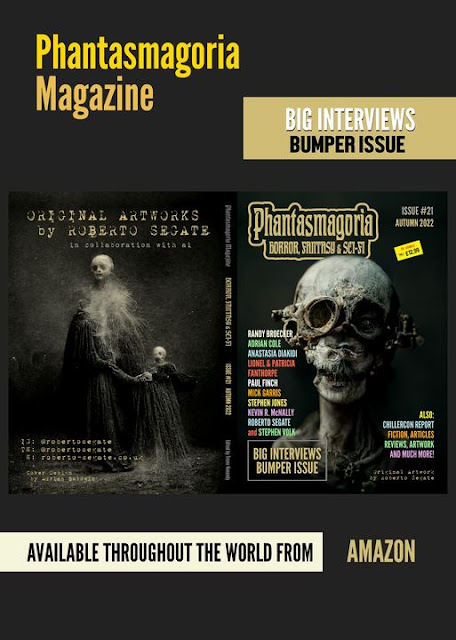 Phantasmagoria magazine
Posted by David A. Riley at 18:47