Looking forward to Sunday the 28th May when Jim Pitts and I will be motoring down to Birmingham to attend the one-day Fearfest at the Gunmakers Arms. Guests include Norman J. Warren and the actress Aeileem Daly, but the guests we are more interested in meeting are our old friends Steve Jones and Dave Suttons, who will be celebrating four decades of collaboration, starting with the now all but legendary Fantasy Tales.

Tickets are only £15.00 plus a small handling fee. Which is incredibly cheap consideriung what is on for offer. As well as guest of honour, director Norman J Warren (Satan's Slave, Terror, Inseminoid), there will be appearances from scream queen Eileen Daly (Razor Blade Smile, Cradle of Fear), award-winning editors David A Sutton and Stephen Jones (Fantasy Tales, The Pan Book of Horror Stories) -- plus a special surprise guest who'll be joining us for a Q&A following our screening of classic gorefest Theatre of Blood, starring Vincent Price.

NORMAN J WARREN
Although he made his debut as a feature director with the gritty drama Her Private Hell (1967), Norman J Warren is known best for the string of British horror and science fiction movies he launched with Satan’s Slave (1976, aka Evil Heritage), followed by Prey (1977, aka Alien Prey), Terror (1978), Inseminoid (1981) and Bloody New Year (1987, aka Timewarp Terror). In 2016, he announced his first movie in 30 years, a thriller set within London’s Chinese community (you can watch him discussing it here); it’s currently in post-production, but Norman is generously taking time out to join us at the Birmingham FearFest.

EILEEN DALY
A generation of British horror fans grew up with Eileen as the face of the Redemption video label, but it was her acting talents on display when she took the lead role in Razor Blade Smile (1998), as vampire assassin Lilith Silver. Eileen’s extensive film career also includes Demonsoul (1995), Cradle of Fear (1998), Monsters of the Id (2007), Unrated: The Movie (2009), Braincell (2010), The Turning (2011, aka Zombie Lover) and The Amityville Asylum (2013). More recently, Eileen’s stepped behind the camera and will be presenting one of her own productions.

STEPHEN JONES and DAVID SUTTON
Back in 1977, in this very city, Steve and David launched Fantasy Tales, one of the most influential magazines in horror history and a showcase for fresh and veteran talents alike, such as Ramsey Campbell (the Birmingham Horror Group‘s own honorary president), Clive Barker, Dennis Echison, Joel Lane and Thomas Ligotti, plus an array of artists which included Jim Pitts, Dave Carson and JK Potter. Since then, they’ve co-edited the legendary Pan Book of Horror Stories and worked on many projects independently, but they’ve chosen the inaugural Birmingham FearFest to celebrate the fortieth anniversary of that very first collaboration.

SPECIAL SURPRISE GUEST APPEARANCE AND Q&A
The FearFest weekend coincides with the 106th anniversary of the birth of a true horror legend, the Merchant of Menace, Vincent Price. Not only are we marking the occasion by screening the 1973 gorefest Theatre of Blood, there’ll be a special appearance by someone directly connected to this classic movie. Whilst we cannot disclose his – or her – identity at this stage, we can guarantee you’re in for a real treat.

Email ThisBlogThis!Share to TwitterShare to FacebookShare to Pinterest
Labels: fearfest 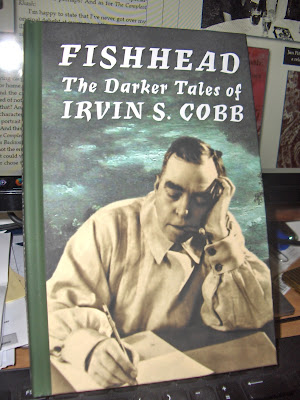 Parallel Universe Publications is pleased to announce that we have now published a hard cover version of Fishhead: The Darker Tales of Irvin S. Cobb, which is available direct frrom us for £20.00, including postage and packing within the UK. Overseas purchasers, please contact us for details. 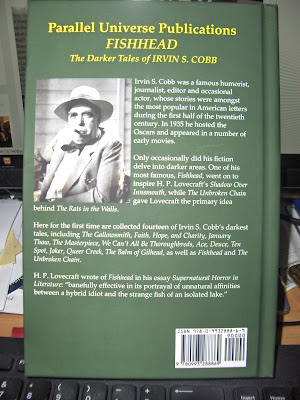 Thanks to Robert Essig I am watching the best copy I have ever yet seen of that classic 1970s horror movie, Horror Express. I have a couple of DVDs of this film but they're awful - worse than poor quality VHS tapes! This, though, is true HD.

Enthusiastic review of Shades: Tales of Supernatural Horror by Joseph Rubas on hellnotes 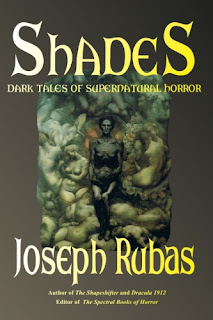 There's a great review for Joseph Rubas's collection Shades: Tales of Supernatural Horror on the hellnotes website (Journalstone):
"This an excellent book by an author who surprised me in a positive way. Joseph Rubas’ writing reads like that of an older, more seasoned professional even though he is pretty young guy. It feels a little like he is channeling the writers of the old horror pulps in the 22 stories that make up Shades. Think of a young Richard Matheson and early episodes of The Twilight Zone and you’ll have the vibe. Good stuff!"
To read the full review go to:
http://hellnotes.com/shades-book-review/
Posted by David A. Riley at 22:49 No comments: