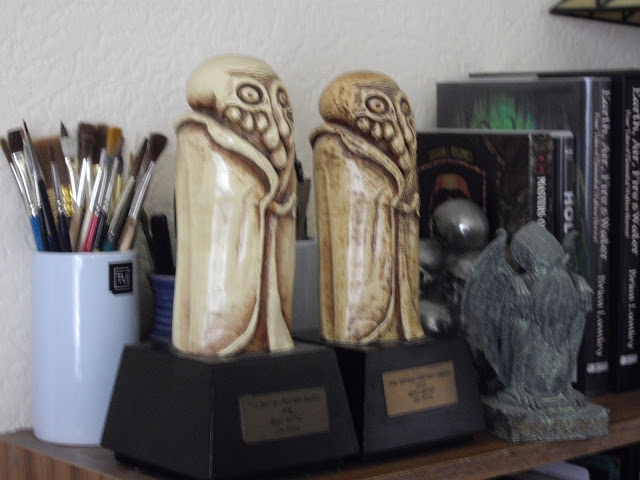 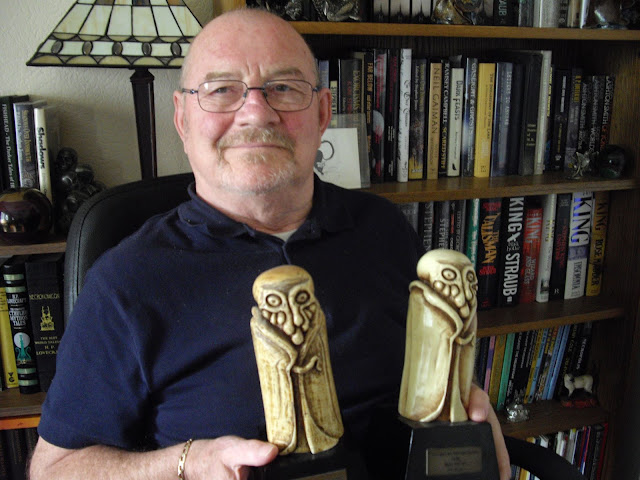 Pre-Order Offer on The Fantastical Art of Jim Pitts

The Fantastical Art of Jim Pitts - pre-order price: £35.00 plus postage and packing. All pre-orders will include 4 high-quality, personally signed A4 black and white prints of Jim Pitts' artwork, which will be unavailable elsewhere. Pre-orders are any made up to and including the 1st September, 2017, when the book will be published.

Copies can either be pre-ordered using the PayPal button or by cheque, payable to Riley Books, 130 Union Road, Oswaldtwistle, Lancashire, BB5 3DR, UK.

The book is limited to 250 numbered copies, every one of which will be signed by Jim Pitts.

After FantasyCon the price will rise to £40 plus postage and packing. 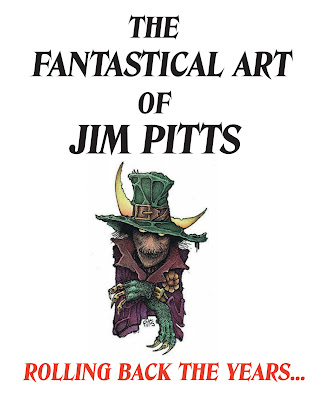 Dedicated Facebook Page for The Fantastical Art of Jim Pitts

We now have a dedicated page on Facebook for The Fantastical Art of Jim Pitts, where uptodate information about this great book will be regularly posted.

Please take a look at it. Better still "like" it too. 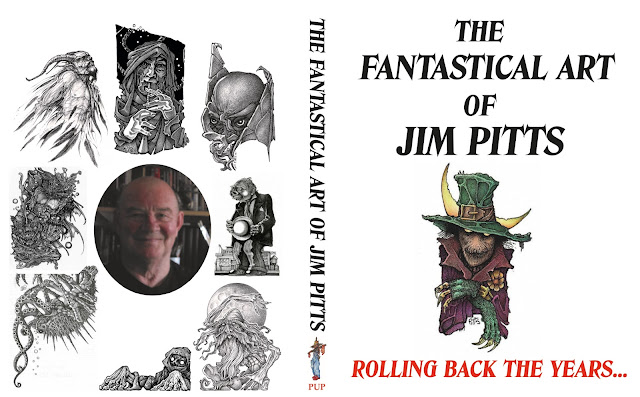 Proof copies received for The Fantastical Art of Jim Pitts

The proof copies of The Fantastical Art of Jim Pitts have arrived. Even though I knew the size of the book beforehand I was still surprised to see just how big the book is in reality! Here are a few photos of it. 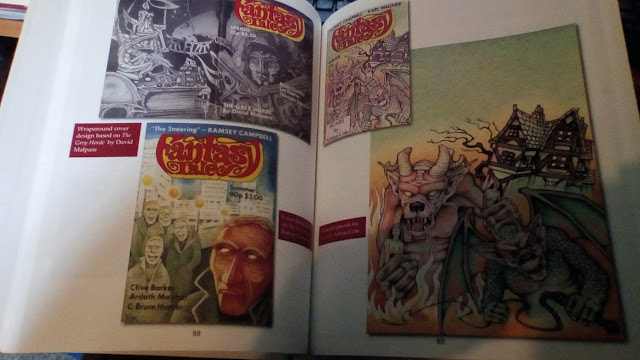 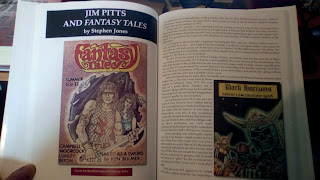 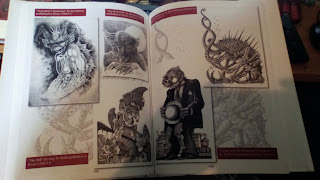 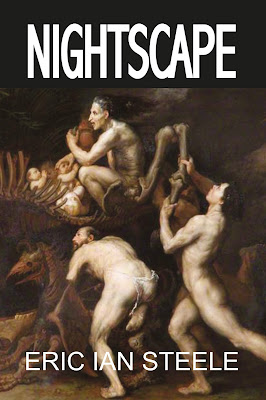 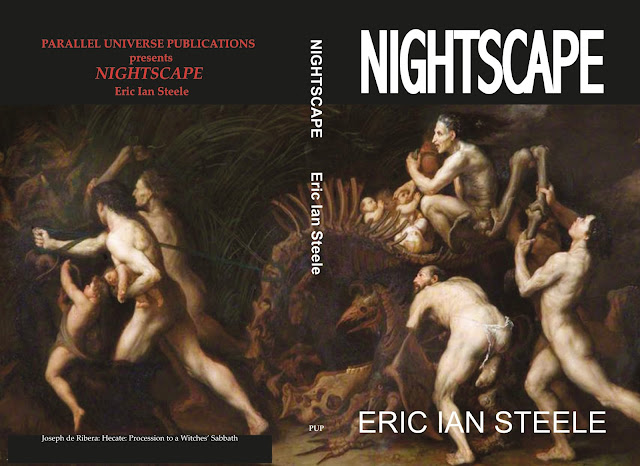 The dangers of the honest reviewer

The eminent Lovecraftian scholar S. T. Joshi on his blog dated June 14th, 2017, mentions  complaints raged against a recent review he wrote on his blog and for Dead Reckonings.  Link.

"It would appear that certain individuals were a tad put out by my review of The Children of Gla’aki, edited by Brian M. Sammons and Glynn Owen Barrass."

Please take a look at this entry to get full details of what occurred.

This highlights a growing problem, probably exacerbated by social media, for anyone with the temerity to write an honest review.  It strikes me that too many writers today get on their high horse about any review that is anything other than unqualified praise. Not only do they make their displeasure known, but all too often their "fans" and sycophants will mercilessly turn against the unfortunate reviewer.

This is a ridiculous and self-destructive response. Not only, for any fair-minded observer, does this make these people look thin-skinned, self-delusional and pathetic, but it endangers the practice of writing any reviews at all other than unqualified praise, whether deserved or not.

Ask any writer and they will instantly admit that they want reviews. They clamour for them. They want them more than almost anything else. They'll give away free copies in the hope of getting them. Or the hope, let's be honest, of complete praise!

I have heard of reviewers being castigated for, not only giving negative reviews, but for merely failing to give the kind of praise the writer and his or her supporters expected from them.

It's a nasty tendency, one which stifles free speech and in the long run could destroy the ability of most reviewers to be honest.

So far I have never responded to a negative or less than flattering review. I hope I never do. I hope my reaction will continue to be to think, instead, upon what the reviewer has said and take a serious, objective and analytic look at what has been criticised, because, let's face it, the reviewer could be right - and by taking these criticisms under consideration, I could become a better writer. I have done this several times in the past and it's resulted, I hope, in me improving my writing. That's partly how we learn.

To those who can't take criticism, I would say grow up. If not that, then at least have the sense to leave reviewers alone or face the very real possibility you might put people off writing honest (and thereby worthwhile) reviews at all. Stop being online bullies and leave reviewers to get on with their task to write what, in their view, is an honest evaluation of what they have read.

Red Dwarf XII is due on Dave in the Autumn

After a dip in quality several seasons ago, Red Dwarf XI certainly showed there was plenty of life and orginality left in the series, so I'm looking forward to another dose of Dwarfish lunacy. I can't think of any other science fiction comedy series with the charm, quirkiness nor sheer insane inventiveness of Red Dwarf, whose aging cast have adapted well to their advancing years!

After
Red Dwarf updated their profile picture.
6 hrs ·
RED DWARF XII. Landing on Dave in Autumn 2017!
Posted by David A. Riley at 17:15 No comments: 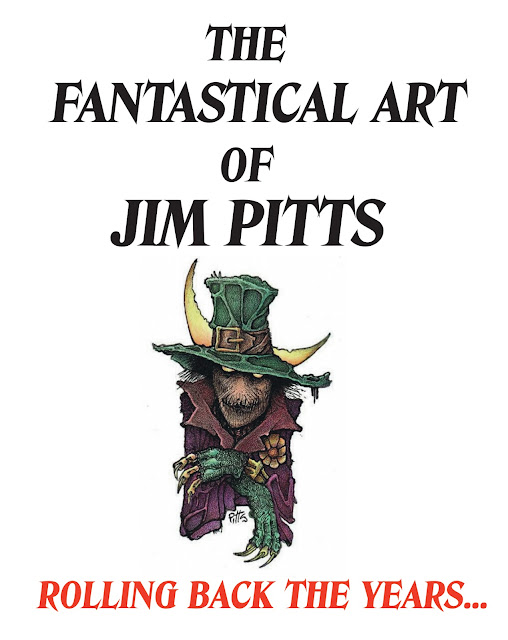 After a few final tweaks, The Fantastical Art of Jim Pitts is now at the proofing stage. Within the next week we expect to have a proof copy of this book in our hands, prior to publication. At 214 pages, 8.5 x 11 inches in size, this hardcover book contains hundreds of black and white and full-colour illustrations covering all the years since 1972 when Jim's art first appeared in fanzines like Shadow and Balthus right up to the present day, with illustrations for Brian Lumley's Earth, Air, Fire & Water, Four Tales of Elemental Mythos Horror! published by Fedogan & Bremer.
As well as illustrations, the book also contains articles by Brian Lumley, Ramsey Campbell, David A. Sutton, Peter Coleborn, Jon M. Harvey, Nick Caffrey, Stephen Jones and David A. Riley.
Published as a limited, numbered edition of 250, each copy will be signed by Jim Pitts.
Although the book will be launched at Fantasycon in Peterborough on October 1st, we will be posting details of how you can order this book before then. Any pre-orders will entitle the purchaser to four high-quality, personally signed prints by Jim Pitts.  The price of the book for pre-orders and at Fantasycon will be £35, rising to £40 afterwards.
Posted by David A. Riley at 15:53 No comments:

Best British Horror, edited by Johnny Mains, is back!

My story Help-Plants illustrated in Aboriginal Science Fiction in 1998

Sorting through a box of old material, I came across this all but forgotten picture in the now defunct magazine Aboriginal Science Fiction from Summer 1998, which contained my story Help-Plants. Definitely one of the more curious illustrations I have ever had drawn from one of my stories.

Other Visions of Heaven and Hell reviewed

A fabulous review of Jessica Palmer's collection from Parallel Universe Publications, Other Visions of Heaven and Hell, by Ezeiyoke Chukwunonso.
https://mytrendingstories.com/…/a-review-of-jessica-palmer…/

Email ThisBlogThis!Share to TwitterShare to FacebookShare to Pinterest
Labels: Ezeiyoke Chukwunonso, Jessica Palmer, Other Visions of Heaven and Hell

David Ludford's A Place of Skulls - reviewed on Horror Review

A Place of Skulls – Book Review

A Place of Skulls and other Tales David Ludford Parallel Universe Publications Released 10/4/2016 Reviewed by Brian James Lewis This interesting collection of twelve speculative fiction shorts by D…
horrorreview.com
Posted by David A. Riley at 22:54 No comments:

Email ThisBlogThis!Share to TwitterShare to FacebookShare to Pinterest
Labels: A Place of Skulls and other tales, David Ludford

Wordery - all of Parallel Universe Publications' books can be ordered here

If you don't care for amazon, all Parallel Universe Publications books are available at wordery.

Wordery.com
With over 10 million books on Wordery, all with free worldwide delivery, we're dedicated to helping fellow bookworms find the right books at the lowest prices.
wordery.com
Posted by David A. Riley at 22:46 No comments:

Adam Nevill's The Ritual now coming to the big screen

The original novel by Adam Nevill is brilliant and one of the best horror novels I've read in recent years. I just hope this lives up to it - though the trailer does look promising!

The Mask of Fu Manchu

I just finished reading this, the first Fu Manchu novel I've finished in over fifty years. I remember buying these in cheap American imports with some amazing covers back in the day when every newsagent in the UK stocked Marvel and DC comics and copies of magazines like The Castle of Frankenstein and Famous Monsters of Filmland. Did the book live up to my memories? Though this book is a beautiful 1950s reprint of the 1933 original, and a book I'll treasure on my shelves forevermore, I found the story a lot more tedious and non-thrilling than I expected, not helped by the clunky first-person narrative. Oh well...