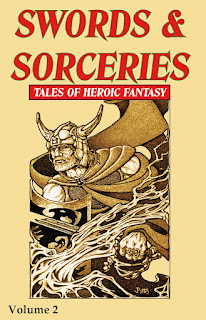 Here are some brief details of the authors whose stories will appear in Swords & Sorceries: Tales of Heroic Fantasy Volume 2, to be published in June.

Opening the collection is The Essence of Dust by veteran horror, fantasy, SF writer Mike Chinn. Mike lives in Birmingham, UK, with his wife Caroline and their tribe of guinea pigs. In 2012 he took early retirement so he could spend more time writing (and not housework). Over the years he has published over sixty short stories, as well as editing three volumes of The Alchemy Press Book of Pulp Heroes, and Swords Against The Millennium, also for The Alchemy Press. His own contribution to the Pulp Adventure genre, The Paladin Mandates, garnered two nominations for the British Fantasy Award in 1999, and Pro Se Productions have recently published a revised and extended edition. Pro Se also published the second Damian Paladin collection, Walkers in Shadow, along with his first Western, Revenge is a Cold Pistol.

In 2015, his Sherlock Holmes steampunk mash-up, Vallis Timoris (Fringe-works), sent the famous detective to the Moon. Parallel Universe Publications has also published a collection of his stories, Radix Omnium Malum.

Tais Teng (Highjacking the Lord of Light) is a Dutch SF writer and illustrator with, in his own words, the quite unpronounceable name of Thijs van Ebbenhorst Tengbergen, which he shortened to Tais Teng ’to leave room for a picture of an exploding starship or a clever steam-punk lady on the covers of my novels.’

In his own language he has written everything from radio-plays to hefty fantasy trilogies.

To date he has sold sixty-eight stories in the English language and two children's books: When the Nightgaunt Knows Your Name and The Emerald Boy. His YA novel Phaedra: Alastor 824, set in the universe of Jack Vance, has been published by Spatterlight Press.

His most recent sales have been to Daily Science Fiction, Unreal, Lowlife and Cirsova.

Martin Owton (Out in the Wildlands) lives in the south of England. In addition to some 30 published short stories, he has written 3 published novels: 2 non-epic adventure fantasies, Exile and Nandor – ‘which could certainly be called sword and sorcery’ – and a con-temporary fantasy Shadows of Faerie set in Southampton and the New Forest. A former member of the defunct T-Party Writers Group, he is represented by Shiel Land Associates. In real life he is a drug designer for big pharma. 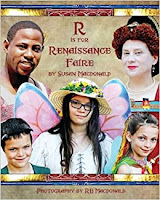 Susan Murrie Macdonald (Zale and Zedril) is only one of three writers who also had stories in our first volume. Susan is a free-lance wordsmith: ghost-writer, blogger, journalist. She has published roughly twenty short stories, mostly fantasy, but also some science fiction, westerns, romance, and children's stories. She is the author of R Is For Renaissance Faire, a children's book based on her four years as a volunteer with the Mid-South Renaissance Faire.  She is a stroke survivor, although she has been out of the wheelchair almost two years and can limp half a mile with the help of a cane.  She is an ex-copy editor and an ex-teacher.  She still works as a freelance proof-reader.  She is a staff writer for SciFi. Radio with over a hundred articles posted on their website. She is, of course, working on a novel; ‘isn't everyone?’

Susan lives in a small town in Tennessee about twenty kilometres from Memphis.  She is married to a travel agent and has a son and daughter of university age. She has had stories in Tales from OmniPark, Under Western Stars, Space Force: Building a Legacy, Cat Tails: War Zone, Wee Tales, The Caterpillar, Sirius Science Fiction, Itty Bitty Writing Space, Bumples, Alternative Truths, More Alternative Truths, Paper Butterfly, Sword and Sorceress, Knee-High Drummond and the Durango Kid, Barbarian Crowns, and Supernatural Colorado.

The second writer also to have been included in our first volume is Steve Dilks (The Amulet and the Shadow). Steve has been published in Weirdbook, Startling Stories, Savage Realms Monthly, Heroic Fantasy Quarterly and Savage Scrolls. His novellas of Gunthar, the Black Wolf of Tatukura were collected together in the paperback Gunthar - Warrior of the Lost World. Another collection, this time featuring his sword-&-sorcery hero Bohun of Damzullah is due to be published under the title Bohun; The Complete Savage Adventures. His second Bohun story The Horror From the Stars appeared in volume 1 of Swords & Sorceries.

Andrew Darlington, whose Antediluvia: Seasons of the World is arguably the most unusual story in this collection, watched the very first episode of ‘Dr Who’, he also watched the most recent episode.    He says that whatever academic potential he may once have possessed was wrecked by an addiction to loud Rock ‘n’ Roll and cheap Science Fiction, which remain the twin poles of what he laughingly refers to as his writing career. He is most proud of his Parallel Universe collection A Saucerful Of Secrets. His latest book is a biography of the Beatles spin-doctor Derek Taylor: For Your Radioactive Children (SonicBond Books). His writing can be found at Eight Miles Higher:

Pedro Iniguez (A Thousand Words for Death) is a speculative fiction writer who also enjoys reading and painting. His work can be found in magazines and anthologies such as Space and Time Magazine, Crossed Genres, Dig Two Graves, Tiny Nightmares, Deserts of Fire, and Altered States II. His cyberpunk novel Control Theory (Indie Authors Press, 2016) and his 10-year collection, Synthetic Dawns & Crimson Dusks, (Indie Authors Press, 2020) are available on Amazon.

Originally from Los Angeles, he now resides in Sioux Falls, South Dakota, where he is currently working on his second novel. 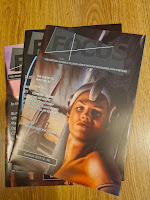 Dev has been editing non-fiction for a number of years and is non-fiction editor for the magazine Khoreo. He is also the editor of Focus, the magazine for genre writers produced by the British Science Fiction Association.

His fantasy often draws on historical events. His story Stone Snake is the start of a series of adventures of the principal character travelling home.

Author of Seven Thrones, Phil Emery’s work has been published in the UK, USA, Europe, and Canada since the seventies. His particular claims to sword-&-sorcery infamy include appearances in the Rogue Blades’ anthologies Return of the Sword and Demons, and the experimental fantasy The Shadow Cycles, together with a doctoral thesis on the subject.  The sworder Zain first appeared in print in a 1972 story entitled Swords at Night.  Both he and his creator are a little longer-in-the-scabbard these days . . .

Adrian Cole (The Eater of Gods) is the third writer who also appeared in volume one. He has been writing stories set in his own fantasy series such as the Voidal and Elfloq for many years, as well as reviving Elak, King of Atlantis, originally created by the late Henry Kuttner. Adrian’s first collection of Elak tales was published in 2020 by Pulp Hero Press to much acclaim. Though not sword and sorcery, his collection Nick Nightmare Investigates won the 2015 British Fantasy Award for best collection and he is a regular contributor to Weirdbook magazine, as well as having stories in anthologies such as Year’s Best Fantasy, Year’s Best Fantasy and Horror, The Mammoth Book of Halloween, Occult Detective Quarterly Presents, and The Alchemy Press Book of Horror.

And, of course, there is the inimitable Jim Pitts. His amazing illustrations add much to the interior as well as the covers of this book. Jim’s career began in the 1970s when he created artwork for David Sutton’s ground-breaking fanzine Shadow. Since then he has contributed illustrations to an impressively wide variety of publications both here in the UK and overseas, particularly the United States. A hardback retrospective of Jim’s work, The Fantastical Art of Jim Pitts was published in 2017. This was split into two volumes for the soft cover version.  Later this year a second hardcover collection of Jim’s more recent work will be published by Parallel Universe Publications: The Ever More Fantastical Art of Jim Pitts.

Introduction by David A. Riley 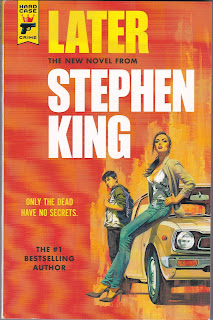 Trevor Kennedy today broadcast my review of Stephen King's novel, Later on Big Hits Radio UK. For those who missed it this is my review:

Stephen King is never afraid of picking up a previously used trope and adapting it. In fact, he openly references the most obvious comparison to this particular trope, The Sixth Sense. Both that and Later revolve around a boy who can “see dead people.” Not only that, but whenever Jamie Conklin, who narrates Later in the first person, asks them questions they have to give him honest answers.

Of course, being a Stephen King novel things don’t pan out well and we soon discover there are horrors out there which can make use of the recently deceased, something which Jamie finds out to his cost.

I must admit I didn’t find this Stephen King book as engaging as I normally do, possibly because it is written in the first person and maybe, too, because he tries to make it read like something a non-literary person would write. But it does move at a cracking pace and there are certainly some unexpected twists and turns along the way. And at around 230 pages it is one of his shortest novels.

Unusually, I didn’t find that the villainous characters, including Jamie’s mother’s one time girlfriend, the corrupt cop Liz Dutton, or the serial killer Kenneth Therriault, known as The Thumper, came over as vividly as they usually do in King’s novels. Perhaps the naïve first-person narrative prevented this, as we only see things from Jamie Conklin’s juvenile perspective.

Nevertheless, for all of this the book is far from boring, and despite being published as a “hard case crime” novel is replete with supernatural horrors – more than enough to satisfy all but the most jaded of King’s fans. 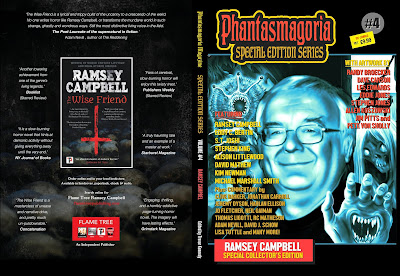