This release was just given by Dave Sutton:

New from Shadow Publishing: The Satyr's Head: Tales of Terror, Selected by David A. Sutton. Cover art by Steve Upham. This is the first new edition of the long out of print Transworld/Corgi Book "The Satyr's Head & Other Tales of Terror", first published in 1975. With stories by Ramsey Campbell, Brian Lumley, Joseph Payne Brennan, Eddy C. Bertin, David A. Riley and others, this new edition will bring back into print some ten chilling tales of the supernatural and the sub-human, of ghosts and demons, strange phenomena and the inexplicable. ISBN 978-0-9539032-3-8, Paperback, 170pp, £5.99
“The Nightingale Floors were part of a crumbling Chicago museum and only the brave or the foolish ventured there after dark. The building had a weird history – and no night watchman stayed there long...”
“Winnie was The Prefect Lady and Rupert loved every little bit of her. But when the neighbours saw her at close quarters, panic spread through Lavender Hill...”
“Aunt Hester had strange powers. Her ability to transfer herself into the body of her twin brother had a hideous ending – or was it a beginning?”
“Lamson was intrigued by The Satyr’s Head. He bought the little relic from an old tramp. It brought him nightmares, disease and, worst of all, unnatural passion from a foul incubus...”

Steve Upham has just revealed the amazing cover he has done for this anthology, which was originally published by Corgi Books in 1975.

Just picked up my copies of The Century's Best Horror Fiction from the Post Office this morning. Surprised at just how large they are! It might take Cemetery Dance a long time to produce a book, but when they do it's magnificent. 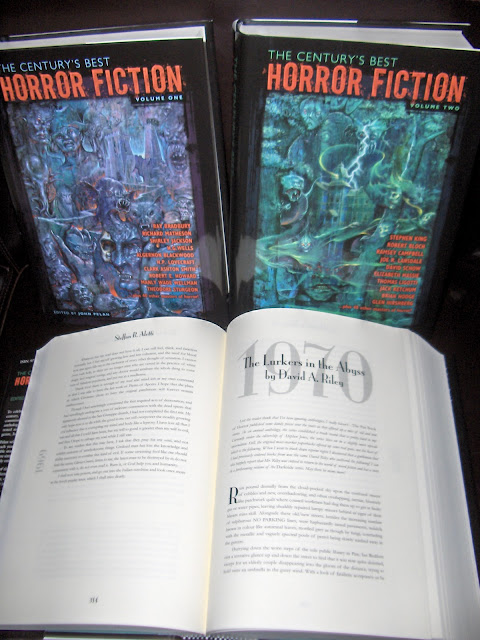 Email ThisBlogThis!Share to TwitterShare to FacebookShare to Pinterest
Labels: Cemetery Dance, Lurkers in the Abyss, The Century's Best Horror Fiction

An amazingly good, in-depth review of The Eighth Black Book of Horror is on The Zone site. I particularly loved the remarks about my own story in it, The Last Coach Trip.

"..but following story from David A. Riley seems to be heading in an even quieter direction, more Last Of The Summer Wine than I Know What You Did Last Summer. His brilliantly titled Their Cramped Dark World, a disturbing tale of a dare gone horribly wrong, in The Sixth Black Book Of Horror, might be more the kind of thing fans of his classic urban horror story Lurkers In The Abyss might expect from this veteran of Pan horror.

The Last Coach Trip by contrast is a tragicomic elegy to traditional northern working class culture, rather like a Twilight Zone episode, but with dry humour undercutting any tendency to sentimentality that might imply. It's also a touching portrait of a friendship. Harold is worried when his friend Eddie turns up late and the worse for wear to the last of their working men's club's annual outings and piss-ups, where they visit country pubs and bookies and bemusedly watch an X Factor runner-up. Maybe Eddie's got Alzheimer's, but the change in Eddie is more profound, and the Last Coach Trip of the title has a more macabre meaning. "Some days should never end," says Eddie, and their eerie fate is a warning about being unable to cope with change."


That's the kind of review that can't help but make me smile.
Posted by David A. Riley at 14:46 No comments:

Email ThisBlogThis!Share to TwitterShare to FacebookShare to Pinterest
Labels: Black Book of Horror

Just come across the first review I've found so far for The Century's Best Horror Fiction. I've been a bit wary of seeing these as I know there has been some contention over the years about the stories chosen by editor, John Pelan.The review is at Dreadful Tales.