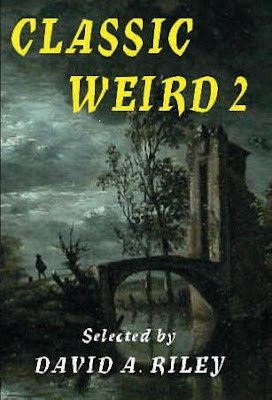 Classic Weird 2 is now available as a trade paperback and an ebook .

This 298-page volume contains weird tales by some of the classic authors of the genre, including J. Sheridan Le Fanu (An Account of Some Strange Disturbances in Aungier Street), E. F. Benson (The Judgement Books), Vernon Lee (Oke of Okehurst), Vincent O'Sullivan (When I was Dead), Edith Wharton (The Eyes), W. C. Morrow (A Story Told by the Sea), Irvin S. Cobb (The Unbroken Chain), Edith Nesbit (From the Dead), Robert Murray Gilchrist (Witch In-Grain), Amyas Northcote (The Downs), and J. H. Riddell (The Uninhabited House).

This little beauty just arrived today. Looking forward to playing it, though I can't help but wonder what HPL would have made of it!
Posted by David A. Riley at 12:47 No comments:

Email ThisBlogThis!Share to TwitterShare to FacebookShare to Pinterest
Labels: Cthulhu

Dave Dubrow gave His Own Mad Demons: Dark Tales from David A. Riley a great review on The Slaughtered Bird website.

REVIEW: His Own Mad Demons

Published May 16, 2016 | By Folklore
Review by- Dave Dubrow.
‘His Own Mad Demons’ is an anthology of short stories written by David A Riley, who’s been an active horror writer since he published a story in the eleventh volume of the legendary Pan Book of Horror Stories in 1970. The tales in Riley’s His Own Mad Demons are all set in the English moorland town of Edgebottom, where the supernatural lurks in every shadow. Riley’s gritty, descriptive prose and fundamental themes are timeless, making this collection a must-read for true fans of horror.
The first tale, His Own Mad Demons, follows the travails of petty criminal Nobby, who’s been given a relatively simple job to do. After things go pear-shaped, Nobby’s attempt to go on the lam is beset with obstacles both natural and supernatural.
In Lock-In, a group of old men calling themselves the Grudgers find that leaving their favorite pub isn’t anywhere near as easy as getting in. A gory piece of psychological horror mixed with Lovecraftian elements.
The Fragile Mask on His Face has a dream-like feeling to it in that the reader knows that something terrible is in store for the protagonist, but is powerless to stop it. A story with twists and turns and a most unusual antagonist.
For a slow burn building to a horrific climax, The True Spirit is a tale that shows you the face of evil, making you hope against hope that the poor characters catch on before it’s too late.
The anthology ends with The Worst of All Possible Places, as apt a title as you’d want. Though the prologue is a bit unnecessary, the remainder of the story is the most frightening in the entire collection, even with as unlikable a protagonist as Bill the drunk.
If you’re looking for message fiction, you won’t find it here. This is good old-fashioned horror, a collection of scary stories told well. It’s these kinds of tales that brought so many of us to horror literature in the first place, and it’s refreshing to see that they’re still relevant, still frightening.

Many thanks to Joe Young for this birthday picture, which goes along so well with the pressie I got from my daughter and her husband last night. 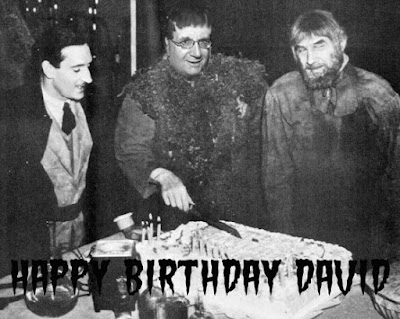 As my birthday present from my daughter, Cassie, and her husband, Alan, I got the Glen Strange Frankenstein monster, completing my collection. The three Karloffs, Chaney and Lugosi had a party last night.

Dead Ronnie and I published in Sanitarium Magazine

My zombie story, Dead Ronnie and I, set in the Isles of Scotland, is in issue 44 of Sanitarium Magazine. 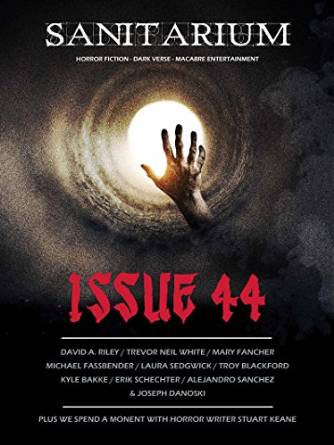 Sanitarium Magazine Issue #44: Bringing you the Best Short Horror Fiction, Dark Verse and...
Welcome to the Sanitarium The perfect length for your in-between reading/ you’ll love the portability of this little slice of damnation as you tremble while you wait for the…
amazon.co.uk
Posted by David A. Riley at 11:36 No comments:

Email ThisBlogThis!Share to TwitterShare to FacebookShare to Pinterest
Labels: Dead Ronnie and I, Sanitarium Magazine, story

Does anyone else think that the worse the writer the more they resent bad reviews? As a rule of thumb, mind.
Posted by David A. Riley at 11:29 No comments: