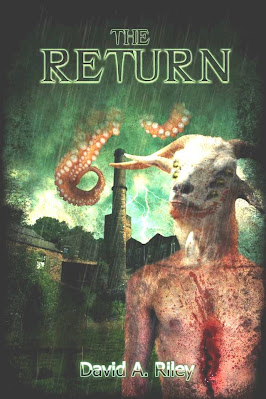 There are now links to buy copies of this book on Amazon.co.uk and Amazon.com.

The cover is by the brilliant Croatian artist Andrej Bartulovic.

The Return is set in Edgebottom, which contains the district of Grudge End, both of which have featured in a number of my stories over the past few years, including Lock-In, The Fragile Mask on His Face, The Worst of all Possible Places, The True Spirit, Old Grudge Ender, and Scrap in Dark Visions 1 from Grey Matter Press). In his review of my collection, His Own Mad Demons, Jim Mcleod (Gingernuts of Horror) wrote: "Robert Rankin has his Brighton, Terry Pratchett has his Discworld, and so David A. Riley has his Edgebottom, and I for one know which of these worlds I would like to take a return trip to."

"To paraphrase Shakespeare, there is something rotten in the Northern English town of Edgebottom, especially within the district of the appropriately named Grudge End. The ground there is sour, cursed for centuries perhaps. The powerful Malleson family have owned the now derelict mill at the epicentre of the area for decades, a family with some twisted secrets of their own. Over the years, countless horrors have occurred in Grudge End; brutal ritualistic murders, whole families massacred with their heads removed, and many others driven to insanity and suicide by the catalogue of ghastly events there.
Gary Morgan is a man with a rather shady past, to say the least. He grew up in Grudge End and when he was a teenager his drunken brute of a father was viciously butchered in what was believed by many locals to be an occult-related murder. Although having moved away from the area for quite some time, Gary’s own life has been shrouded with criminal connections and several failed marriages. He decides to return to his home town for one last time before the streets and mills where he spent his youth are pulled down for good. And to escape the clutches of some quite nasty London-based gangsters as well.
On his return, Gary bumps into an old school friend of his, Kevin Cross, whose increasingly manic paranoia surrounding ‘something’ in town is just the tip of the very dark iceberg of what is to follow. When Kevin has his arm savagely hacked off by a mysterious assailant, a series of events begin to unravel, all connected to Gary, the vile Malleson family, and the deep, ancient secrets of Edgebottom. As the bodies begin to mount up and the baffled police close in, something very Old is awakening from a long slumber…
Bloody hell, it really is grim up north! And down south in London too, it appears. Author David A. Riley presents us with an extremely violent, bleak, fantastically weaved tale that could perhaps best be described as H.P. Lovecraft meets the Kray twins via the kitchen sink British realism films of the late 1950s/early ‘60s. It is gloriously dark in Edgebottom, literally and figuratively, from the highly sinister occult goings on, to the East End gangsters out for their pound of flesh. Even the weather here is persistently miserable, with its torrential rain, bitter coldness and overcast skies.
Riley’s story is expertly created throughout, with the narrative point-of-view seamlessly switching between the main protagonist, the investigating police detectives, the gangsters, and so on. The building tension and mystery surrounding the town is both gripping and morbidly fascinating. When the real horror kicks in around the second half of the book, the appearance of the satyr-esque being is indeed a sight to behold. A truly terrifying, seemingly unstoppable creation of pure unadulterated evil.
There are the aforementioned homages to Lovecraft, more so towards the end, however these slide in perfectly to the rest of Riley’s tale, one that would still stand strong on its own even without the Lovecraftian influences.
A definite recommendation for fans of grim horror and HPL alike." 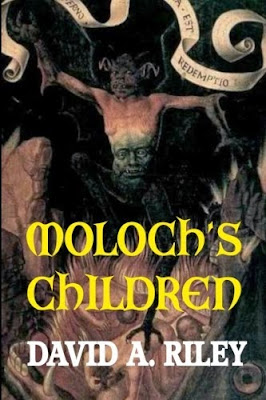 Unfortunately, the magazine ceased to appear after only two installments of Sendings had been published, so I decided to publish it under the Parallel Universe Publications imprint, renamed Moloch's Children.

Moloch’s Children by David Riley, Parallel Universe Publications
Reviewed by Ian Hunter
This is my kind of book, only 213 pages long with a prologue and epilogue and 36 chapters in between, evidence of how fast-paced a novel “Moloch’s Children” is; in a tale that reminded me of the works of Dennis Wheatley, Ramsay Campbell and Richard Matheson; although it’s not as “quiet” as these last two writers. In his short fiction, Riley has never been one to shirk away from bloody horror and he doesn’t here.
The novel centres around Elm Tree House and its surrounding grounds. It is an abandoned place that has a dark reputation, one of those “You don’t want to go there” places so prevalent in horror fiction and film, but local poacher, Teb, doesn’t have a choice and what he sees there will change his life forever.  Cue the appearance of novelist, Oliver Atcheson, who is recovering from the death of his wife and his own nervous breakdown. The house and the grounds seem the ideal place for an artist’s retreat, even though the locals wouldn’t go near it, but why does it have such a fearsome reputation and what are those strange brass feet that have been discovered in the cellar? Perhaps all will be revealed to the painters, poets and sculptors who have taken up residence there, or it will be revealed by a local historian who knows all about the medieval monastery built on the original site which was put to the torch while all the so-called devil-worshipping monks were hanged in the nearby woods and the Abbot was hung, drawn and quartered in the village square, and what was left of him was left hanging in a cage in the village as a warning to others before those remains mysteriously vanished.
It’s good vs evil, but who will win, and what will be left of them, in terms of mind and body, and perhaps, even soul? Read “Moloch’s Children” and find out. 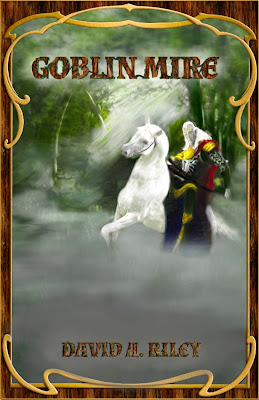 Goblin Mire is available in trade paperback, published by Parallel Universe Publications. There is also a kindle version.

British Fantasy Society: review by Simon Ives:
"Had enough of trying to get your brain round the latest sci-fi epic, chockfull of phantasmagoria?  The sort that leaves you, well, frankly confused about what you have just read?  Then jump aboard this roller coaster of a tale, firmly grounded in old style fantasy and primarily told from the viewpoint of goblins and elves."

Full review
Latest review on amazon.com dated August 2021:
"A well written fantasy novel not for the faint hearted. The author created an interesting world and great characters. I recommend it those who enjoy their fantasy with lots of violence and bloodshed."
Order Direct from Parallel Universe Publications