I have finally finished a new sword and sorcery story: Mask of a Mad God, which continues the saga of Welgar the Northerner, who first appeared in Ossani the Healer and the Beautiful Homunculus and then in The Dark Priestdom, neither of which have as yet been published, though they are out there awaiting a decision. Fingers crossed!

Email ThisBlogThis!Share to TwitterShare to FacebookShare to Pinterest
Labels: Mask of a Mad God, Ossani the Healer and the Beautiful Homunculus, The Dark Priestdom, Welgar the Northerner

My Retro Review of The House of Cthulhu by Brian Lumley 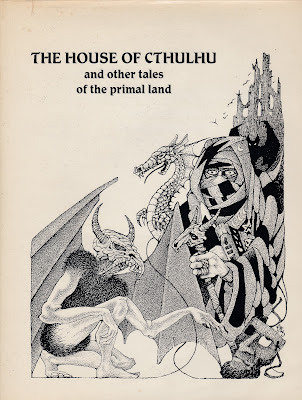 This review was specially written for the Phantasmagoria Brian Lumley Special.

THE HOUSE OF CTHULHU and Other Tales of The Primal Land

This is a large format book measuring 8¾ inches by 11¼ inches, so although only 95 pages long it’s still quite a good read as each page is roughly the equivalent of 4 in a normal sized book.

Lavishly illustrated throughout by award-winning artist Jim Pitts, The House of Cthulhu contains eleven stories by Brian Lumley plus an Introduction by one of the fictitious characters in it, explaining how the ancient manuscript from a previously unknown civilisation from before the Age of the Dinosaurs was found and translated.

All the tales are set in the fictitious continent of Theem’hdra, the only landmass on the face of the Earth in those distant days, during a time when sorcery still prevailed.

It’s a well imagined world, complete with a detailed map. It is also, of course, as the book’s title reveals, part of Lumley’s vision of the Cthulhu Mythos. Although I prefer Lovecraft’s original concept than this Derlethian derivation, it works well enough in the kind of swords and sorcery fantasy setting within which these tales take place. Indeed, the title story itself is a remarkable work, including a disturbing and utterly disgusting curse picked up by anyone foolish enough to venture into Cthulhu’s house on R’lyeh, complete with a singularly nasty climax.

One of the things that struck me about these tales is how good Lumley is at depicting interesting and credible sorcerers. The first story, The Sorcerer’s Book is a wonderful tale of a battle for supremacy between a group of them, and, as with many of these stories, has a suitably fitting twist at the end.

How Kank Thad Returned to Bhur-Esh, by contrast has as its main protagonist an exceptionally vicious barbarian. Kank Thad is no Conan. Though strong and violent, he takes unrepentant pleasure in killing his opponents. Which is why, when he is finally apprehended, tried and sentenced, it’s to climb the Ghost Cliffs of Shildakor. All but vertical and mountainously tall, no one has ever succeeded in reaching the summit and freedom before falling to their deaths. But Kank Thad is confident he can manage what no one else could, for “back home as a youth he had used to climb the sea-cliffs for gull eggs with the best of them…” So skilled is he at climbing, even partway up he manages to exact his revenge on some of those who sentenced him, until he finally discovers the cliffs didn’t receive their name without reason…

There are more supernatural menaces in Tharquest and the Lamia Orbiquita, a tale that gets continually darker, while Mylakhrion the Immortal is another yarn of sorcerous treachery, brief but enjoyable in its twists and turns.

Tarra Khash is a regular character in a number of Lumley’s stories, a “bronze-skinned” barbarian “in leather breach-clout and sandals with jewelled ceremonial sword in its long curved sheath strapped to his broad, well-muscled back”. Two volumes of Tarra Khash tales were published by W. Paul Ganley - The Compleat Khash: Volume 1 Never a Backwards Glance and The Compleat Khash: Volume 2 Sorcery in Shad, both illustrated by Jim Pitts.

In Isles of the Suhm-Yi Khash sets sail to a stretch of islands in pursuit of a gang of vicious pirates who have wronged him. This coincides with the annihilation of the Suhm-yi, a strange race of Moon worshippers, by a random cloud of deadly gas. By chance a couple of them survive – though they are fated to be captured by the pirates looking for a hidden treasure whose whereabouts they are convinced the couple know. Combine this with a slumbering god, Gleeth the Blind, and this is quite some tale!

Lords of the Morass is a grisly story of two prospectors who discover the source of a vast hoard of gold. But the people who have access to it worship a monstrous sluglike “gods” that live in the swamp within which the gold can be found. These are possibly the most obnoxious creatures to be found in this book. Despite the horror of these things, though, our prospectors are determined to make themselves rich.

The barbarian Tarra Khash returns in Curse of the Golden Guardians. All but dead after crossing the Nameless Desert he chances across a mysterious old man cooking his breakfast by a large lake in a hollow. Though the two seem destined to become friends, there is something not right about the old man’s explanation of why he is here, nor why he so generously offers Tarra Khash to become his partner in stealing a golden idol. Tarra Khash suspects there is more to the stranger than meets the eye.

Cryptically Yours is in the format of a series of letters between two sorcerers worried about the inexplicable deaths of so many of their confrere. As the letters progress some significant changes take place between them with some typically Lumleyish twists and turns.

The penultimate tale, The Wine of the Wizard starts off in the “present” day. Theired Gustau has concocted a special wine to a recipe found in an ancient manuscript. Unbeknown to him, his nephew, Erik, decides to taste some of it and is immediately overcome by what he thinks is a hallucination – until he realises his mind has been sent back into the body of a young man on the long-lost continent of Theem’hdra where he becomes fascinated in sharing this other person’s life.

The final tale is The Sorcerer’s Dream – which is ultimately a nightmare about the sorcerer Teh Atht, concerned about the alleged immortality of Cthulhu.

All in all, The House of Cthulhu is an entertaining mix of sword and sorcery, outright sorcery and Lumley’s brand of Mythos fiction, tied together in the same primordial setting. Jim Pitts’s illustrations, some of them full page, augment them brilliantly.