Pleased to have just had a 12,100 word story, Scrap, accepted for an anthology from Grey Matter Press in the States, Dark Visions. This should be published sometime later this year.

This is a taster from the opening pages:
It was a month since Gary and his older brother moved into their new house in Edgebottom and he hated it. Although the council estate was similar to the one they’d been brought up on in Blackburn, that was where all their friends lived and they couldn’t get on with the lads here, who seemed to be a close knit bunch of inbred country bumpkins. Edgebottom was miles from anywhere, stuck out in a valley in the middle of the moors like a big grey canker. Gary liked the word canker. Then again, he had a fondness for words that puzzled others, especially Eddie, who might be a year older but was so slow he’d been kept back a year in school and was in the same class as Gary. That always struck him as hilarious. Some people thought they had to be twins because they were in the same year, till he explained that, no, he wasn’t the runt of the litter (Eddie was two inches taller than him) it was because Eddie was thick. Not that he ever let Eddie hear him say that. Thick or not, Gary loved him in a way only brothers brought up by arsehole parents could, even though one of those arseholes was dead. A mean little man, their father had always either been drunk or on drugs, and never worked. It was a bright day when he’d overdosed, which was how they came to leave their council house in Blackburn and ended up in Edgebottom, where their mum grew up. Their old home might not have been heaven on earth but this place was shit as far as Gary and Eddie were concerned, especially when their mum shacked up with another loser. Ten years younger than their mother, Pete didn’t look it, with bad skin and bags beneath his eyes. So far he hadn’t hit the boys but they had had more than a few warnings, and Gary was wary. It wouldn’t be long before something happened, though time was on their side. Eddie would be fifteen at the end of the month, and they were getting big enough to stand up for themselves, especially if they looked out for each other.
Gary gazed across their garden with its tufts of dead dandelions, nettles and scraps of garbage, most of it rusting, that Pete had dumped in it, like the engine of a crashed motorbike that was seeping oil or the fridge whose insides stank and were full of mould. It was impossible for Gary to imagine anyone ever putting food in there. In the distance he could see the grey rooftops of Grudge End, a derelict area of terraced streets that rose up the same steep slope as the estate. Some of Grudge End’s terraced streets had been demolished, which was where the estate had been built. The rest loomed like a drab ghost town, about which he had heard enough tales from the boys at school to give him the creeps. It had a bad reputation, even though no one lived there anymore. From what he’d heard at school no one had lived there since long before any of his classmates were born. It was supposed to have been demolished by the council years ago but for some reason no one seemed able to explain they hadn’t. One word was that the council couldn’t find anyone who was interested in developing it, so the houses stayed, decaying in their own good time, but that seemed unlikely to Gary.

Here's an update on Shadow Publishing, including a couple of books with which I am involved:

Horror! Under The Tombstone: Stories from the Deathly Realm. On 25 March 2013 Shadow Publishing will be issuing Horror! Under The Tombstone, a reprint in one volume of the long out of print "New Writings in Horror and the Supernatural" volumes 1 & 2 (1971/1972). Stories by Ramsey Campbell, Robert Holdstock, David A. Riley, Kenneth Bulmer, E. C. Tubb and Rosemary Timperley feature in this blast from the past. Twenty-three stories in all. ISBN 9780953903269 , UK price £10.99. Special offer on copies ordered pre-publication date: £8.50 (Plus postage). Go to the website and use the PayPal to order a copy (discount also available to buyers from Europe and USA/RoW. Contact me if you wish to pay by cheque in UK currency.

The Whispering Horror by Eddy C. Bertin. This summer we publish the first English language collection by the one of our most distinguished European horror writers. Eddy Bertin has been writing fiction for over 40 years and his work has appeared in The Year's Best Horror Stories, Weirdbook, Fantasy Crossroads, The Pan Book of Horror Stories and many other publications. With 14 stories and novellas, this collection will showcase Eddy's work from his early days, such as 'A Taste of Rain and Darkness' (1969) to 'A Whisper of Leathery Wings' (1976) to 'Dunwich Dreams, Dunwich Screams' (2005). Eddy is the author of over 25 horror genre books, novels and collections and over 60 pulp, western, erotic and murder mysteries, under various pseuonyms. He has also published 20-plus novels for younger readers. The cover artist for this collection will be Harry O. Morris. Check the website for more details.
Further down the line Shadow Publishing hopes to launch two new titles, by Samantha Lee and David A. Riley, at the World Fantasycon (www.wfc2013.org/index) in Brighton next year.
Posted by David A. Riley at 08:48 No comments:

Email ThisBlogThis!Share to TwitterShare to FacebookShare to Pinterest
Labels: David A. Sutton, Shadow Publishing, The Lurkers in the Abyss

I came across a review for The Mammoth Book of Terror edited by Stephen Jones, which included my story The Satyr's Head, recently reprinted by Dave Sutton in The Satyr's Head: Tales of Terror.

I particularly liked: "It’s perverted and repulsive, taboo breaking and hard to read at times, and must have been at the cutting edge of ‘70s horror fiction, because it still packs a punch even now." 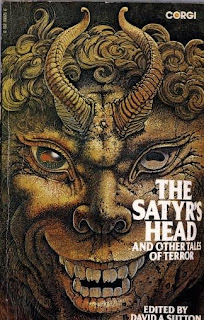