The Lurkers in the Abyss & Other Tales of Terror - update

Things are moving along quite smoothly for the publication of my short story collection in October by Shadow Publishing. Cover artwork has been commission by Dave Sutton for my artist of choice, Paul Mudie, whose fantastic paintings have graced the covers of all the Black Books of Horror.

After some discussion it now looks as if Paul will be basing his painting on my story Fish-Eye, which is possibly the most Lovecraftian one in the book (it was first published in the Lovecraft eZine) with my own turn on the Deep Ones.
Posted by David A. Riley at 15:58 No comments:

This charity anthology is available now via kindle for £2.88 at Amazon.co.uk and at Amazon.com

The book is being published by Karoshi Books, first as an ebook, followed by a POD paperback. All profits go to The Beatson Cancer Research Institute.
Posted by David A. Riley at 09:19 No comments:

Under the Knife edited by Kevin G. Bufton

This anthology from Cruentus Libri, edited by Kevin G. Bufton, is now available via Amazon at £6.99 (print version) and £1.34 (kindle).

It includes my science fiction horror story Winter on Aubarch 6 which was originally published in 1989 in Fear magazine. 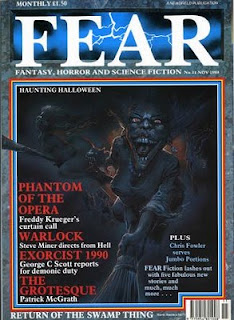 Just received the latest issue of Dark Discoveries in the post this morning - and it's even bigger than ever. This is one magazine that definitely looks to be improving all the time. Pleased to see, too, that Hazardous Press have an advert in it, including for my collection of short stories, His Own Mad Demons.

I'll be doing a review of the magazine later as soon as I have managed to read it, though at over 100 A4 pages that's going to take a couple of days.

The cancer research charity anthology, The Unspoken, edited by William Meikle is finally, after a few ups and down, scheduled to be published in the near future by Karoshi Books, first of all as an ebook, followed by a POD paperback. All profits will go to The Beatson Cancer Research Institute.