It would have been Vincent Price's 100th birthday today. As it is, today sees Sir Christopher Lee reach 89.

Coincidentally, two days ago it was also the anniversary of Peter Cushing's birth. 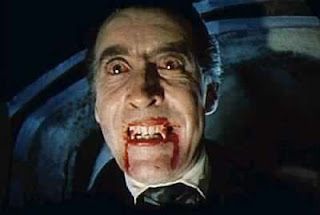 This is the cover for the next issue of the BFS Journal I think this is my favourire cover for it so far.

I remember when DC started the Green Lantern comics in the 1960s. I once had a complete collection of them, till I finally decuided to give up getting comics (big mistake) and got rid of them (even bigger mistake!)

Anyway, Green Lantern has finally made it to the big screen. Looks good too.

Will You Still Love Me In The Morning - Oswaldtwistle Players

The next production for the Ossy Players will be Will you still love me in the morning, which will run from October 12 - 15th at the Civic Theatre, Oswaldtwistle. The farce is by Brian Clemens and Dennis Spooner.
Posted by David A. Riley at 10:16 No comments:

Received a copy of this book through the post a week or so ago as part of my new duties as a member of the HWA's Stoker Jury for Novels. I've not read many zombie novels - they're not normally my preferred reading, I'll admit. The only ones so far have either been by Brian Keene or David Wellington, two of the better horror novelists who specialise a lot on this particular trope.

Joe McKinney is a new writer to me. I must admit, in my ignorance, not knowing his name before this book arrived. That said, I found this a thoroughly satisfying and enjoyable read - if you can call having to put a book down sometimes because you have been brought to the brink too often over the past few minutes and need a break! It's a sign of a writer's skill that he can make you empathise with his characters - and not just the good characters either. And it's an even better sign of a writer's skill that his bad characters - the villains, other than the zombies - are never painted just in black, but have redeeming features as well, sometimes even admirable ones, like courage, self sacrifice and a sense of duty. The zombies, of course, are important to this novel, and these are truly horrible creatures - perhaps some of the worst I have ever come across either in books or films. Also important is the general situation, which is Houston, Texas, flooded by a succession of freak storms that have destroyed its infrastructure and killed off much of its population. The main characters are members of Houston's police, who are striving to keep what order they can in a deteriorating situation that is quickly escalating from bad to worse. Add to this an ebola-related infection which turns its victims into zombie-like cannibalistic nightmares.

This is a long book, well over 300 pages, but it is never boring, switching through a well-drawn cast of interesting characters who are struggling to make sense of what's happening and to survive. The ending, I'll add, is thoroughly satisfying and well worth the trip.

Joe McKinney is definitely a writer whose books I'll look out for in future.
Posted by David A. Riley at 08:19 No comments: