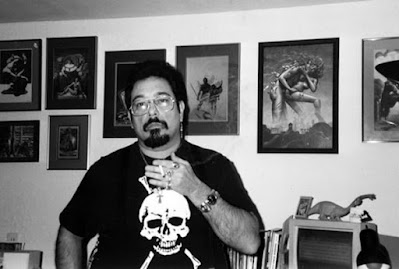 I was shocked and saddened to hear that my old friend John Pelan had died.

John was instrumental in getting me involved once more in writing after I had more or less given it up till he contacted me about including the very first story I ever had published (in the 11th Pan Books of Horror back in 1970) in his two-volume anthology The Century's Best Horror Fiction, published by Cemetary Dance. He also included a new story of mine in his last anthology for Roc Books, Alone on the Darkside. We remained in steady contact for quite some time after this, as he was looking forward to publishing my first collection of short stories in his Midmight House Press imprint, but unfortunately his fortunes deteriorated at this time and, sadly, Midnight House and his other imprint, Silver Salamander Press closed down and he moved from Seattle to New Mexico, after which our contact became sporadic.

I will never forget the encouragement he gave me at a time when I needed it.
Posted by David A. Riley at 09:25