The next issue of Phantasmagoria Magazine will contain a review of Johnny Mains' A Distasteful Horror Story:

Review by Trevor Kennedy for Phantasmagoria Magazine.
The narrator of this very darkly humorous novel is a horror fanboy - a huge fanboy, in fact. Especially for the British literary scene, excitedly attending as many of the conventions as possible with an enthusiastic glee. He’s been an obsessive collector of horror-related books, film props and other memorabilia all his life, growing up in the 1980s binging on Video Nasties and other related pastimes. All set to the backdrop and trauma of his girlfriend’s brutal murder at the hands of her father when they were mere teenagers, naturally. The Wonder Years, this is not (thankfully!).
The man at the centre of things is looking back upon his life so far - from the highs (interviewing Stephen King for Fear magazine and hanging out with other genre stars), to the lows (errr… let’s just say they’re pretty graphic and crazy) - from the comfort of his relatively new home, a prison cell where he is spending some time at Her Majesty’s pleasure for a little incident that resulted in him murdering the popular (and fictional) horror author, Carson Fisher. But as this reflective plot develops, it turns out that Carson is not quite the hero the narrator once thought he was and a revenge plan is soon on the cards. I mean, what would you do?
This book is a fascinating read on many levels so I’ll try my best to convey this without losing myself somewhat. Bear with me.
First and foremost, it works as an outright (very) dark comedy/revenge/horror story, at times rather extreme and almost flirting with the bizarro sub-genre. Fans of this type of material will enjoy it for that reason alone, especially if you have as warped a sense of humour as I do (it’s only fiction, people - calm down!). But there is a lot more to it than just that.
Admittedly, I often have a habit of personalising my reviews, and it’s one I’m conscientiously trying to break, but it is totally necessary in this case. Murder and much other nasty stuff aside, I actually found myself relating to a lot of what the ‘anti-hero’ in the prison cell is recounting, especially the nostalgic tributes to 1980s non-mainstream childhood pastimes, like the under-appreciated magic of VHS, watching obscure foreign films late at night on Channel 4, old horror anthology paperbacks, and more. The fact that the author and I were born in the same year and (presumably) have similar interests dating back to our younger days, is, of course, an obvious factor in me liking and ‘getting’ this book more than perhaps people with more mainstream interests will. But it’s not a mainstream book anyway, so my point here is sort of a moot one.
I also found myself smiling broadly at the narrator’s rants about modern life, especially certain aspects of social media. This book is arguably even in part an angry satire of twenty-first century life, Brett Easton Ellis-style, Johnny Mains looking back on those halcyon days of his youth through the eyes of his character, rose-tinted glasses affixed (maybe).
Another really enjoyable aspect of this book is how Mains blends real-life people and names within the genre community into his tale alongside his fictional creations like Carson Fisher, in a very humorous meta manner. They’re all there - Stephen King, Stephen Jones, Ramsey Campbell, Les Edwards, Harlan Ellison, Tanith Lee etc. And when the main character lands a job at Fear magazine, it really did bring a grin to my face. 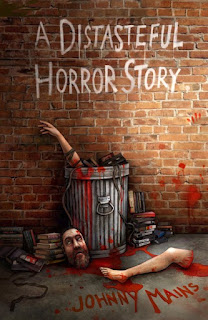 Additionally, along with the extreme violence and horror, there are also some very well-observed digs at fandom in general, and other pop culture staples (Jimmy Savile included!). The picture it paints of prison life is remarkably accurate and well-researched (I think!) as well.
This book is never going to be everyone’s cup of tea - it is niche in quite a few ways - but so what? It wasn’t written to have a broad appeal anyway. Aficionados of the British genre scene (and the scene as a whole) will generally love it, and I include myself in that category too, of course.
It’s a read that is rather hard to put down, with all its erratic, deranged madness, brutal murders, horror lore references, and savage commentary on a plethora of issues.
Posted by David A. Riley at 00:05