When Robert Aickman was Guest of Honour at Fantasycon

This article was originally written for a centenary collection of articles, interviews and stories dedicated to Robert Aickman. As this book was never published - and is now unlikely ever to appear - I thought I would share my brief reminisce of when Robert Aickman was Guest of Honour at the second ever Fantasycon back in 1976. 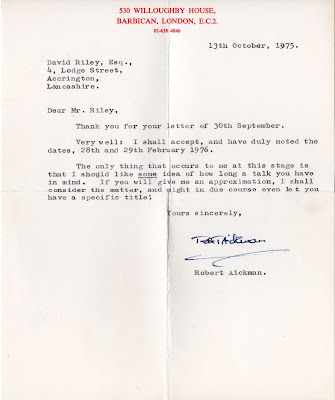 The British Fantasy Society was formed in 1971. In the early days the BFS was far too small to hold its own conventions and, though we soon created the first of our annual awards (The August Derleth Award for Best Novel) we used the Easter Science Fiction Conventions to announce it.

It was not till 1975 that the BFS had grown confident enough to hold its first convention. This was a one day event in February at the old Imperial Hotel in Birmingham, a much loved if scruffy hotel that was long ago demolished. Although only forty-three members had booked in advance, we were delighted when over sixty turned up on the day – making it a rip roaring success!

On the back of this it was almost immediately decided to hold a second convention the following year, again at the Imperial and this time over two days. We had also gained enough confidence to invite a high profile writer as our guest of honour. And you didn’t in those days aim much higher than Robert Aickman, who was approaching the zenith of his literary career. The year before, he was awarded a World Fantasy Award for his story Pages from a Young Girl’s Journal.

As events organiser for this convention, it was my task to invite him. Perhaps not surprisingly, for an organisation that hardly anyone had heard of at the time, which had only just managed to upgrade its publications from mimeographed sheets to lithograph and still had only a minuscule membership, our proposed guest of honour was initially uncertain whether to accept or not. He had genuine doubts as to whether we would appreciate the kinds of stories he wrote, which were certainly not like those normally found in the horror, fantasy, and SF sections of bookshops then. Fortunately he knew Ramsey Campbell, who was soon to become the society’s president, and I was able to persuade him that, contrary to his foreboding, his stories were exactly the kind of fiction our members were interested in. Finally, to my relief, he wrote back, “Very well: I shall accept, and have duly noted the dates, 28th and 29th February 1976.”

With great work from all the members of the then committee the convention was an even greater success than the year before with over a hundred guests. With some favourable publicity in several publications, including the monthly newsstand magazine World of Horror, which ran for 12 issues through 1974 before folding at the end of the year, membership of the BFS had grown far beyond its initial handful.

With so much to do as organiser at Fantasycon I didn't get much chance to see Robert Aickman but I did make sure I was there throughout his guest of honour speech. He spoke at length with his customary eloquence on a number of subjects, including his involvement in saving Britain's canals and about literary functions at Foyle's. He also, of course, spoke about ghost stories. In his report on the convention in the next issue of the British Fantasy Society Bulletin, Adrian Cole wrote: "Mr Aickman gave us a thought-provoking talk on ghost and supernatural writing, and of how he feels we should react to its varying styles - he made the interesting point that ghost writing should be aimed at the nine tenths of our mind that is unconscious rather than at the one tenth we use, explaining that subtlety and the hinted suggestion can be far more potent a weapon than the graphic shock of overwritten violence. Mr Aickman spoke of his involvement in writing and of how it had led him to meet a good many reputable fellow writers; he also touched on difficulties that can be found in having one’s work adapted for television, and of how he had rejected a generous offer to write something to order for a wealthy film company – which partially explains why he is an artist as much as an entertainer, in a field where polish and style are all too difficult to find.”

Later that evening a number of us accompanied him to an Indian restaurant. Having something of a reputation as a wine connoisseur, when it came to choosing which bottles to order the question was deferred to him.  I was amused and impressed when Aickman’s laconic answer was “the cheapest”.

Robert Aickman was a perfect guest for our fledgling convention, courteous and willing to overlook any short fallings that might have occurred in our organisation of it. He set a standard for future conventions.