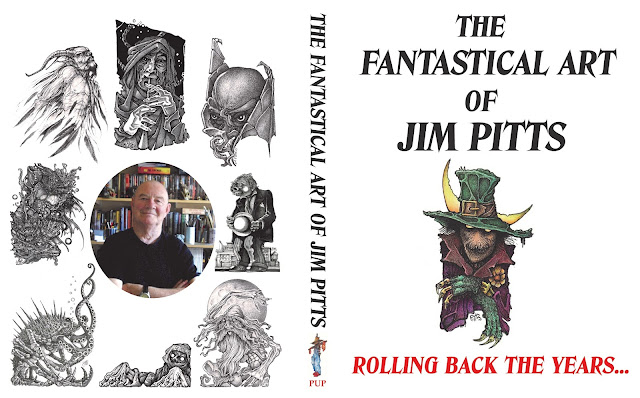 Great progress has been made with The Fantastical Art of Jim Pitts: Rolling Back the Years..., the most ambitious project yet undertaken by Parallel Universe Publications. The book will be approximately 220 pages in length and contain hundreds of black and white and colour illustrations, going back to the very earliest days of Jim's career as a fantasy artist in the 1970s  when he became a mainstay for such legendary fanazines as Shadow, Balthus and the British Fantasy Society's Dark Horizons, right up to today, with books such as Brian Lumley's lavish hard cover from Fedogan & Bremer, Earth, Air, Fire & Water, Spectre Press publications like Cthulhu, The Hyborian Gazette and books from Alchemy Press, Shadow Publishing and PUP.
Above is a rough copy of the cover, though that is still very much a work in progress.
The book is scheduled to be published in August/September as a numbered and signed limited edition hard cover, eight and a half inches by eleven. Details of how to pre-order this book (and the offers being made for any who take up this opportunity) will be given shortly. Copies of the book will also be available at FantasyCon, where Jim will be on hand to personally inscribe any books bought. As this is a signed limited edition copies will only be available though the Parallel Universe website or at FantasyCon.
The book includes articles by Brian Lumley, Ramsey Campbell, Stephen Jones, David A. Sutton, Adrian Cole, Peter Coleborn, Jon M. Harvey, David A. Riley, and Nick Caffrey.
Posted by David A. Riley at 22:40