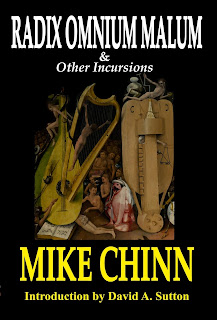 Mike Chinn lives in Birmingham, UK, with his wife Caroline and their tribe of guinea pigs. In 2012 he took early retirement so he can spend more time writing (and not housework). Over the years he has published over sixty short stories, as well as editing three volumes of THE ALCHEMY PRESS BOOK OF PULP HEROES, and SWORDS AGAINST THE MILLENNIUM, also for The Alchemy Press. His own contribution to the Pulp Adventure genre, THE PALADIN MANDATES garnered two nominations for the British Fantasy Award in 1999. A second Damian Paladin book, WALKERS IN SHADOW, is to be published by Pro Se Productions; as is a Western: REVENGE IS A COLD PISTOL. In 2015, his Sherlock Holmes steampunk mash-up, VALLIS TIMORIS (Fringeworks), sent the famous detective to the Moon.