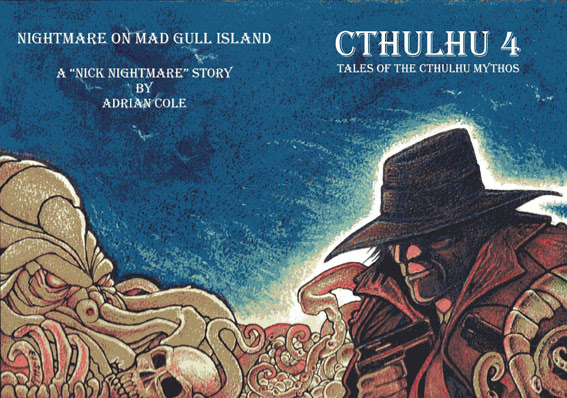 Copied from Pete Coleborn's excellent Piper at the Gates of Dawn website:

Coming at Easter 2014, and brand new from Spectre Press: Cthulhu 4: Nightmare on Mad Gull Island is a Nick Nightmare novella by Adrian Cole. The wraparound cover is by Jim Pitts, also making a welcome return to the genre.

Publisher Jon Harvey says: “Since restarting Spectre Press in 2012, after a 30-year hiatus, I have begun publishing again. The first was a portfolio of artwork by the likes of Stephen Fabian, David Lloyd, SMS and Dave Stewart – eleven plates in all, plus a wraparound cover and a booklet that introduced each plate. Then in 2013, I decided to resurrect an old favourite publication of mine, Cthulhu: Tales of the Cthulhu Mythos. Issue 4 is the aforementioned Nightmare on Mad Gull Island. Cthulhu 5 is a new novella by Andrew Darlington. More titles to follow.”

Nightmare on Mad Gull Island is available in two formats: booklet (£5.00) and hardcover, which includes an article by Jon Harvey, “Pulp Fiction”, and an afterword by Adrian Cole in which he discusses Nick Nightmare. The signed, numbered hardcover edition costs £20.00.

Contact Jon Harvey at spectrepress01 [at] gmail.com for ordering details.