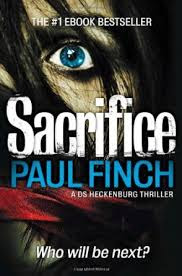 My review for Paul Finch's new DS Heckenburg novel is now on hellnotes.

This is the second Detective Sergeant Heckenburg thriller from the hands of Paul Finch. The first, Stalkers, was published earlier this year to great applause. Thankfully, I can confirm that its sequel has more than lived up to expectations, with Heckenburg and the rest of the Serial Crimes Unit facing the challenge of a series of particularly sadistic murders based upon annual festivals. The first body is a man dressed in a Santa Clause outfit, who has been bricked up to starve to death in the days before Christmas. On Bonfire Night a man is burned to death. On Valentine’s Day a young couple are impaled by an aluminium arrow through their hearts. Worse murders are to follow, graphically described in Paul Finch’s clear, no nonsense style. Under pressure from the media, the Serial Crimes Unit are struggling with little solid information to go on even as it becomes clear that more than one killer must be responsible, especially after a horrifically grisly re-enactment of the crucifixion.
The descriptions of the towns across Britain in which the murders take place are vividly described in all their sordid detail and it’s obvious that Finch knows them and, in particular, their less salubrious areas well. Likewise, with his experience in the police, in which he served for some years, he has a first hand knowledge of low life criminals, which adds authenticity to the book. Both these, and a vivid imagination, honed in the horror genre for years, make this a crime novel which no horror fan will be disappointed with. The action scenes pack a hefty punch and are certain to set the adrenalin flowing, particularly towards its violent climax, when all hell lets loose.
Ending the book are the first thirty pages of the next Heckeburg novel, Hunted, as a taster.