The Daylight Gate by Jeanette Winterson 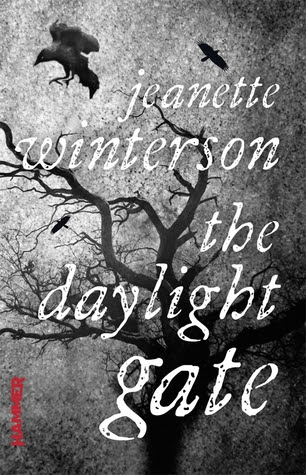 Hellnotes have just posted my review of Jeanette Winterson's The Daylight Gate:

In 1612 seven women and two men were executed at Gallows Hill, Lancaster Castle, as witches. It is an event made famous by the lawyer, Thomas Potts’ account of the trial in The Wonderfull Discoverie of Witches in the Countie of Lancaster and, later, by Harrison Ainsworth’s Gothic masterpiece The Lancashire Witches. The events were later related in Robert Neill’s 1951 historical romance, Mist over Pendle.
Living within site of the infamous hill, I know I should like this book more than I do. The author’s debut novel, Oranges Are Not the Only Fruit, won the Whitbread Prize for First Novel, while its dramatization on television won a BAFTA for Best Drama. Other books by Jeanette Winterson have won prizes too. She is a prominent name in literature. She was also brought up in my home town of Accrington, which is not far from the focal point of where the Lancashire Witches, whose story The Daylight Gate is about.
Although the book stands at over 200 pages in length, the typescript is so large I estimate it is probably less than 40,000 words, the bare minimum for a novel. The writing style is minimalist, too, so pared in fact that little has been left over to flesh out the various characters in it. Even though many suffer horrendous tortures typical for those times at the hands of the authorities, it is hard to feel much empathy for them, being little more than cardboard characters. Contrastingly, the tortures themselves are graphically described. As are the abuses suffered by the accused at the hands of their jailors.
The main characters are Alice Nutter and her lesbian lover, Elizabeth Southern, also known as Mother Demdike. Alone of those tried at Lancaster, Alice Nutter was a wealthy landowner and a respected member of the local gentry. In this novel, though, she is also portrayed as having once been a friend of Dr John Dee and, while she lived in London where she made her wealth, of having been involved with the occult. She is also portrayed as being the lover of a Jesuit priest, a dangerous liaison at a time when Catholicism was banned in England and priests were hunted down, tortured and executed, especially those who were involved in the failed Gunpowder Plot. These were violent times. Paranoid about the dangers of witchcraft, it is uncertain what was worst: being a Catholic or a witch. Both could be capital crimes.
Loosely based on true events, this should be a gripping story. Unfortunately, I couldn’t find myself as involved with the fates of the various characters as I should have been. It is a brisk read, but I can’t say I enjoyed the prose. That may be a question of taste and others may like it. Here is a short but typical example of it:
“Roger Nowell was a widower. Alice Nutter was a widow. They were both rich. They could have been a match. Alice’s land abutted Read Hall. But they had not courted; they had gone to law. Roger Nowell claimed a parcel of land as his. Alice Nutter claimed it as hers. She had won the lawsuit. Roger Nowell had never lost anything before – except his wife.”
Having said this, the story is intriguing and I can see how it would maybe make an excellent film at the hands of a company such as Hammer. As a novel, though, it left me far from as enthralled as I had hoped to be.