Watched two tremendously good Thai ghost movies this weekend. I never before realised just how good Thai films could be. These were a revelation, not only in their technical prowess (which was second to none) but also in the depth and sincerity of their story-telling. 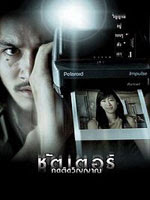 Shutter is the more modern of the two, and is a tale of ghostly revenge, though not the one you may initially think it is going to be about. It also has one of the most chilling photos I have ever seen in a film. Nang Nak is set in the recent past and is based on a Thai legend about a devoted and faithful wife who, even after her death, waits for the return of her husband from the war. It is chillingly beautiful with a unique sadness.
Posted by David A. Riley at 09:58