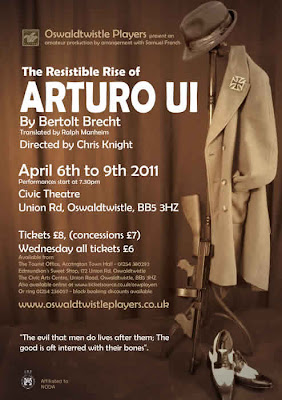 We've now got just two rehearsals left before he play opens on Wednesday night. Looking good. There's plenty of humour and action in it, and the audience will certainly have no time for dozing off with all the gunfire - not that I imagine any of them will be tempted anyway!

This is only the second play I have ever been involved with as one of the actors - and I am enjoying virtually every minute of it. We were at the theatre from ten o'clock yesterday morning till gone five at night. The stage, though sparse, looks very impressive. I'm especially pleased at the fourteen foot banners that Lin made for it. Not to mention all the armbands for the cast!

Paul McGowan plays the lead as Arturo Ui, whose rise to power as the leading gangster in 1920s Chicago mirrors the rise to power of Hitler. Paul is brilliant in the role. Chris Knight, as director, does seem to have a knack to get the best out of the cast too - which is quite large.Despite all the pressures he must be feeling he seems to have kept his good humour - not to mention his sense of humour too!
Posted by David A. Riley at 11:50