Book review in Phantasmagoria - The Assaults of Chaos by S. T. Joshi 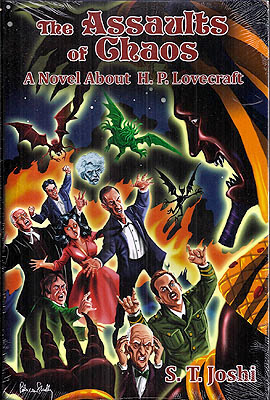 My second review in the latest issue of Phantasmagoria magazine is of S. T. Joshi's 2013 Lovecraftian novel The Assaults of Chaos.
THE ASSAULTS OF CHAOS:
A Novel About H. P. Lovecraft
By S. T. Joshi
Hippocampus Press, New York
2013

The Assaults of Chaos is something of an oddity, a fictionalised account of Lovecraft’s adventures in 1914 in which he meets and works with weird fiction luminaries Ambrose Bierce, Lord Dunsany, Algernon Blackwood, Montague Rhodes James, Arthur Machen, and William Hope Hodgson, plus a certain Kathleen Banigan, the one character who is entirely fictitious - and possibly the most problematic. Although Joshi undoubtedly knows more about Lovecraft’s life than anyone today, for some strange reason he decided to inject a romantic love affair between Lovecraft and Miss Banigan in this novel – a romance, furthermore, which includes some explicit scenes! I must admit I struggled to get my head around this. For a novel involving enemies like Nyarlathotep, and a hitherto unknown trip by Lovecraft across the Atlantic to England on the eve of the Great War, this is perhaps one step too far. Still, despite this Joshi does a skilful job of portraying Kathleen Banigan and making her presence integral to the story, however unlikely her affair with Lovecraft really is.

The other writers are introduced individually over a series of days and are given ample space for some interesting if sometimes stilted conversation, in which they talk about their stories and something of their philosophy as regards weird fiction. It did seem a bit strange that, although we now know how important Lovecraft became as a horror fiction writer, at this stage he was totally unknown and had only penned some juvenilia, most of which he destroyed. It would be some time yet before he would ascend to the same heights as any of the writers he meets, and although a certain person in the story somehow knows his potential and perhaps has an insight into his future, it does seem a bit contrived to involve him in this gathering, formed as it is to channel all the imaginative powers of the then greatest writers in the weird fiction field to aid Great Britain in its fight against Imperial Germany.

Despite its peculiarities and a plot that stretches suspension of belief to beyond its breaking point, it is an enjoyable romp. The conversations in particular between the writers do bring them to life, with some interesting glimpses into their strengths, mannerisms, and peculiarities. And, although the plot is quite absurd, Joshi can certainly write. And it is fascinating to see the horrific literary creations of all these various masters brought into a semblance of life in a lengthy battle for mankind’s future.
Posted by David A. Riley at 15:37