Review of Craig Herbertson's The Heaven Maker & Other Gruesome Tales

Rog Pile has written a detailed, in depth review of Craig's collection, The Heaven Maker & Other Gruesome Tales published by Parallel Universe Publications.
Posted by David A. Riley at 20:03 No comments: Links to this post

From Their Cradle to Your Grave is now out 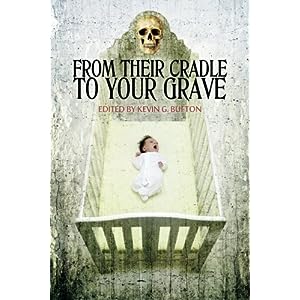 Cruentus Libri's anthology, edited by Kevin G. Bufton , From Their Cradle to Your Grave, which contains a reprint of my story Prickly, is now available.

Amazon.co.uk and Amazon.com
Posted by David A. Riley at 11:22 No comments: Links to this post

Review: His Own Mad Demons

There's an excellent review of my collection, His Own Mad Demons, on the BFS site.

"David A Riley is a  renowned horror author who’s been around for quite a while and has contributed numerous stories in various magazines and anthologies. Apparently (and incredibly)  he’s having his first collection published only now, courtesy of Hazardous Press. I must say it was high time that somebody would take care of this unbelievable oversight, because Riley is a good writer, endowed with  a solid storytelling proficiency and  an expert craftsman of the horror genre..."

Posted by David A. Riley at 21:26 No comments: Links to this post

The Lurkers in the Abyss & Other Tales of Terror

Details of my collection of stories have now been posted on the Shadow Publishing website.

Publication date is October 2013 and the book will be launched at the World Fantasy Convention in Brighton in November.

The cover will be by Paul Mudie.

Introduction by David A. Sutton
The Lurkers in the Abyss
After Nightfall
The Urn
Terror on the Moors
The Shade of Apollyon
Prickly
Writer's Cramp
Winter on Aubarch 6
The Shadow by the Altar
Out of Corruption
A New Lease
No Sense in Being Hungry She Thought
Help-Plants
Inside the Labyrinth
A Sense of Movement
Soft Little Fingers
His Pale Blue Eyes
Fish-Eye
Posted by David A. Riley at 16:15 No comments: Links to this post

Email ThisBlogThis!Share to TwitterShare to FacebookShare to Pinterest
Labels: Books, David A. Sutton, Lurkers in the Abyss, Shadow Publishing


Just started reading Cthulhu Unbound 3 from Permuted Press, edited by Brian M. Sammons and David Conyers. Still on the opening story, Unseen Empire by Cody Goodfellow, which is set in the Old West during and just after the Indian Wars.
Posted by David A. Riley at 09:46 No comments: Links to this post We went to watch The Hobbit this week. Having read that some people found it overlong I was surprised to find that I enjoyed every minute of it - and could have watched more. The acting, scenery, photography, special effects and music were wonderful, more than living up to what I was left to hope for after having watched the Lord of the Ring movies. There was some surprisingly humorous sections too, especially involving the three trolls, who were fantastically gross creations, every bit as homely, rude and downright bad as in the book. At one point I even guffawed out loud, which is not something I've often involuntarily done in a cinema before!

I look forward to getting the DVD when it comes available, especially if there is an extended version - and to the next instalment in this trilogy.

Posted by David A. Riley at 11:56 No comments: Links to this post

The 13 Ghosts of Christmas edited by Simon Marshall-Jones

Over the years Christmas, as well as a time of festive joy, has become synonymous, at least for some of us, with the traditional ghost story. How many of us look back fondly on the BBC's series of Ghost Stories for Christmas, based on M. R. James' classics, starting with The Stalls of Barchester back in the early seventies?

Even for those too young to remember these when they first began it has become something of a tradition. And one in which this collection more than amicably fits. With a suitably macabre cover, the work of Vincent Shaw-Morton, this is a handsome 201 page volume whose look and feel are filled with promise. Thankfully, it is a promise fulfilled by the thirteen stories in it. There are ups and downs, but the ups are always of exceptionally good stories and the downs are never worse than adequate. Beginning with a lively and interesting introduction by horror-enthusiast Johnny Mains, the stories start off with perhaps the best in the volume. An Odd Number at the Table by John Costello is a cracking tale, beautifully well written, with enough twists and turns in its plot to intrigue anyone right up till its chilling climax. This sets a high standard, up to which Jan Edwards' Concerning Events at Leinster Gardens amply lives, wherein the ghosts could be echoes from the past, but echoes that have terrible consequences for those who experience them. I have never been a great fan of William Hope Hodgson's Carnacki stories nor in psychic sleuths in general, but William Meikle, who obviously loves these tales, makes a more than adequate stab at them. And at least in atmosphere sustains the ghostly Yuletide theme of the anthology with a strange story of a possessed ring. Raven Dane's A Taste of Almonds is a densely written atmospheric tale of murder, intrigue and the hallucinogenic properties of absinthe, grotesquely Dickensian in a fascinating way, with some interesting details about poison. The seasonal aspects of the story, though not strictly speaking essential to the tale, do add a nice touch to it. Where the Stones Lie by Richard Farren Barber is set in more modern times, though it concerns a family curse in a country farmhouse in Ireland. Nicholas Martin's story All That Is Living, like William Meikle's Carnacki tale, is about a ring. Unlike the previous story, though, this also includes a demonic snowman, which is far more effective than I would have expected. Snow plays an even more pivotal part in Thana Niveau's And May All Your Christmasses... Evil snow, in fact. And, as we have become accustomed to with her tales, this is a relentlessly bleak, harrowing story, colder even than the season. A strong addition to the middle of the book. This is followed by a shorter story by Martin Roberts. Now and Then is all about guilt, loss and consequences, effectively and eloquently packing a lot into its four pages. I have long loved Paul Finch's stories. And December is no exception, a macabre warning on the paganisation of Christmas, with a final ominous twist. Inspired by Arthur Machen's Ritual, Gary McMahon's Ritualism updates the original to the hopelessness in a bleak modern northern city. Its unsettling depiction of the alienness of children and the potential violence, loneliness and nihilism of urban life is as dark as it gets. Which leads us to the rural violence inherent in an ancient village monument in Neil Williams' We Are a Shadow, whose amateur dramatic society, the Railway Players, are part of a larger pagan survival reminiscent of the Wicker Man. In The Green Clearing by John Forth two families, friends for years, share an annual Christmas holiday in a log cabin miles from anywhere, but as in some of the other stories in this anthology, echoes from the past bring horrors into the present day with horrific results. The final story, Lost Soldiers by Adrian Tchaikovsky ends the book on a strong note in the East Anglian fens where ghosts are resurrected by a band of hapless parapsychologists into finishing off a violent task the fens and death prevented them from carrying out during their lifetimes. Some great details, atmosphere and a truly horrific climax bring this anthology to a satisfying close. Well nearly, because there is a brief extra in the opening pages of Stephen Volk's upcoming novella Whitstable, due from Spectral Press later this year, a fascinating four page snippet whose central character is none other than the late Peter Cushing.

Apart from one story these are all original to this collection, making it an even greater achievement that it lives up to its premise so successfully, showing just what outstanding talent there is these days. It would be nice to think that Spectral Press and Simon Marshall-Jones could repeat this with another volume next Christmas, but they have already set a high benchmark.

Plus the good news for those who missed out on the 100 copy limited edition hardback is that it is being reprinted in paperback. spectralpress.wordpress.com

Posted by David A. Riley at 15:40 No comments: Links to this post

Since then it has taken others, both friends and family, a young mother with two pre-teen children, a cousin who was like a big brother to me, and a girl I never got to know for she was taken before her twentieth birthday. Other family members are still fighting. There's my Dad, who meets it all with a good humour that is humbling, and my godmother who has battled bowel cancer into remission twice.
Cancer is a monster. I can't fight it for them. But as a writer and as an editor there is something I can do. I rallied up some friends, and friends of friends, and asked them for some stories. They responded brilliantly. We've put them together in a wee book.
Coming soon... THE UNSPOKEN
I've been given the opportunity by Johnny Mains and Peter Mark May at Karoshi Books to have THE UNSPOKEN published as an ebook, with a POD paperback to follow, and profits going to The Beatson Cancer Reseach Institute.
The lineup is almost complete... and it's stunning.

With a couple of others still to confirm, I'm already officially excited. Look out for it this coming summer.
Posted by David A. Riley at 22:17 No comments: Links to this post

There is a great, in-depth look at my story collection, His Own Mad Demons, on the Vault of Evil by the site's host, Kevin Demant.
Posted by David A. Riley at 14:32 No comments: Links to this post