We have now received back signed contracts by all our writers and can finally reveal the full list of contents for Kitchen Sink Gothic:

The book is over 200 pages long and will be published as a trade paperback and an ebook in July.
Posted by David A. Riley at 06:51 No comments: Links to this post 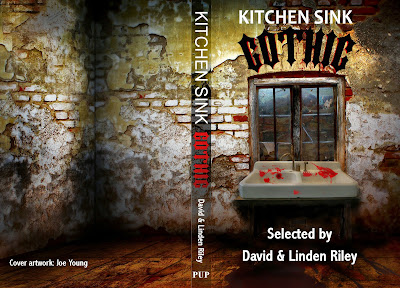 Today we emailed all the rejections and acceptances for Kitchen Sink Gothic. As soon as our contracts for the accepted stories have been returned to us we'll be posting details of the full TOC.

Kitchen Sink Gothic will be available both as a trade paperback and an ebook.

We believe this will be an important anthology, with a great line up and a varied, intriguing and fascinating list of stories.

Posted by David A. Riley at 21:38 No comments: Links to this post 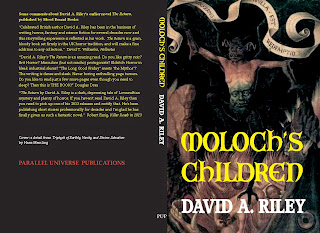 Many thanks to everyone who liked our Parallel Universe facebook page, which has now reached 500!

Posted by David A. Riley at 10:48 No comments: Links to this post

Craig Herbertson's The Heaven Maker and Other Gruesome Tales is now available on kindle. A trade paperback will soon be available on amazon too.

“The Heaven Maker and Other Gruesome Tales is a big win for me. This is a solid anthology with some interesting concepts and horrifying realities.” Matthew Scott Baker, Hellnotes

“A well written mix of the literary, the trashy and the darkly humorous. A fine addition to any horror lover’s library.” Stewart Horn, British Fantasy Society
Posted by David A. Riley at 21:02 No comments: Links to this post

Kevin Demant (Demonik) has started a real-time review of my horror novel, Moloch's Children, on the Vault of Evil.


On a tip-off from the pub gossip, Teb, thirty years a poacher, tonight varies his route to take in the derelict Elm Tree house and stay clear of police and gamekeepers. But there are worse things than the forces of law and order, and what Teb sees that night brings on a stroke and enforced career change. So begins Moloch's Children, the first seven chapters of which were run - as Sendings -over Filthy Creations # 6 and #7 before the magazine again went quiet.

The novel centre's around self-styled "hack historical novelist" Oliver Atcheson's acquisition of the derelict property in Fenley Woods. Oliver is recovering from a nervous breakdown triggered by the death of his wife, Louise, in a car accident, and plans to establish an artists colony at Elm Tree House in her memory. But, although he bought the mansion for next to nothing, extensive renovation work is fast exhausting Oliver's fortune, and his close friend, Morgan Davies, worries that he's taken on too much too soon. There's also the matter of the bloody, horrific and undeniably fascinating legends attached to Elm Tree House and environs. Atcheson is openly grumpy where "rustic gobbledygook" is concerned ", but could it be, after that strange find by the builders, the stories are already playing on his fertile imagination?

Morgan embarks on a fact finding mission, first stop, The Hare And Hounds, where Bob the landlord is happy to tell all he knows. Following previous owners The Murdoch's rapid departure, "the Haunted House" stood vacant for two decades, and the surrounding woods have a dreadful reputation. Teb, the village wino, maintains that it was the touch of "something hard and brittle and dry" brought on the stroke that put an end to his poaching days. Of course, Bob pays no heed to such preposterous nonsense, and, besides, Mr. Atcheson has suffered no ill harm since taking up residence, so no cause for alarm.

Some months later, Morgan and wife Winnie accept Oliver's invitation to spend the weekend At Elm Tree House and meet his fellow creatives. These include Howard Brinsley, a temperamental but good-natured painter, Hazel Metcalfe, enigmatic poet, Tom Bexley, hale and hearty sculptor, and his wife, Alicia, who's taken on the role of house-keeper. Winnie loves the house but not the woods which have an oppressive, even disturbing aura about them. She's not best please that Morgan failed to mention the discovery of that strange artefact in the cellar. "The brass feet of Moloch" - Oliver dates them to the Roman conquest - suggest the basement of ElmTree House once served as a Satanic Temple.

With Oliver still ratty on the subject, the Davies' launch their own investigation, inviting the village Librarian Mr Nevil Wilkes to a pub lunch. Mr. Wilkes, a keen local historian, explains that Elm Tree House was built by Sir Robert Tollbridge, a thoroughly bad egg, on the site of a medieval Monastery. During the twelfth century, amid allegations of sadism and Devil worship, the Monks were taken out and lynched in Elm Tree Wood, and their chapel burned to the ground. The Abbot came off even worse, hung, drawn and quartered in the village square, his remains suspended in a cage until they vanished during a terrible storm. He and a "twig-shinned phantom" abroad in the woods are reputedly one and the same entity.

Wilkes assures them it's not Oliver's new home has the evil name, but the surrounding wood, where several murders have been committed. But has he told them the whole story?


Read more: http://vaultofevil.proboards.com/thread/6033/david-riley-molochs-children#ixzz3cy08tt5z
Posted by David A. Riley at 19:06 No comments: Links to this post