This month's issue of Phantasmagoria magazine contained an in-depth interview with author Craig Herbertson, whose story Wardark is included in Swords & Sorceries: Tales of Heroic Fantasy Volume 3. He discusses the book in detail, including the other stories by Lorenzo D. Lopez, Tais Teng, Chadwick Ginther, Carson Ray, Darin Hlavaz, Mike Chinn, Rab Foster, Jon Hansen, and Adrian Cole.
"I enjoyed the first Swords & Sorceries and I enjoyed this one more. Despite a wide variety of talented authors with a wide variety of treatments and content there is a distinctly themed feel to this anthology. Harking to the past glories of fantasy, it doesn’t let the modern reader down at any moment and it is simply a fun read."
Swords & Sorceries: Tales of Heroic Fantasy is a biannual collection which will reach its fourth volume in June this year. 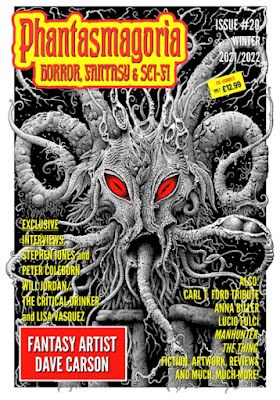 In a new series of mini-interviews, Phantasmagoria asks some quick fire questions to genre authors about their new releases.

Phantasmagoria Magazine: Great to chat, Craig! You have a story in the recently released Swords & Sorceries: Tales of Heroic Fantasy Volume 3. Could you explain a little about the background of this volume and the series please?

Craig Herbertson: This volume is dedicated to the memory of Charles Black, horror author and editor of the critically acclaimed Black Books, who wished to complement his highly successful series with a fantasy equivalent. Charles would have been delighted with David Riley’s tribute and even more delighted with the stories themselves. David’s Introduction also presents a detailed bio on every author, which is welcome in the fiercely competitive world of authorship.

PM: What is your story in the book about? 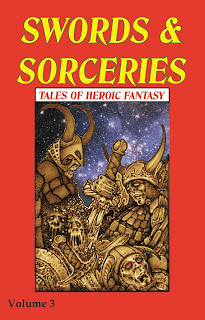 CH: My story is titled ‘Wardark’ and I can blithely state that it’s about a reiver from the Northern Vandergan based entirely on muscled heroes like Conan, Thongor, Brak and that goodly company. Our chap, Wardark finds himself in a pickle with some horrible creatures and a ten-thousand-year-old witch. You’ll need to judge if it’s any good.

PM: What about the other stories in the book, can you tell us something about them?

CH: Certainly. Things begin with ‘Sorcerous Vengeance’ by Lorenzo D. Lopez, a fast-paced adventure which opens with a vicious village raid, a roller coaster race in the face of long odds and ends in a battle against sorcery. If you like an antihero and unremitting dark deeds, this is for you.

As an admirer of Sir Richard Francis Burton and all that Eastern Jazz, Tais Teng’s ‘Seal in Snatchers of Jorsaleem, A Tale of the Inland Sea’ is a welcome reminder of past ages and far places. Unlike Lopez, Teng advances his narrative with a dreamlike nuance reminiscent of Coleridge and the slumber of an opium den. It’s a well-crafted tale where you don’t notice the craft.

‘When the Gods Send you Rats’ they send you Chadwick Ginther, who is clearly a master of words. Ripe with metaphor, simile and poetic language, this is nevertheless a biting tale (see what I did there?). Our heroine, a midwife, has a problem in her dystopian realm which can only be solved with the aid of the ratcatcher. Strangely reminiscent of Gibson’s Neuromancer with a faint aroma of Dickens and other subtle spices, this is a dark tale of poverty and bleak house with a strangely optimistic finale.

‘Mother’s Bones’ by Carson Ray is a thoroughly enjoyable tale with an obsessed but irreverent hero on a quest to retrieve or avenge his mother’s bones. This is another piece of polished writing which creates a genuine empathy with the intrepid Knox, a warrior whose skill in combat is smoothly and expertly described as he enters the Temple of Astoralis where bad things will happen. Knox is as irreverent as any Harry Harrison hero and has a similar invincible quality. I’ve always felt that this combination of dry humour and realism is a hard act to pull off but Carson Ray manages it as easily as an expert juggler with only two oranges. Action sequences are difficult but Ray is absolutely convincing and a joy to read.

Short of cash and owing it to the wrong people, Aaram, an immensely powerful youth, strikes a bargain with the ageing Ophiochus. The wizard has lost a charm to a witch and his gold will keep the debt collectors off Aaram’s back. With luck Aaram can return to his lover and get a steady job.

‘The Lair of the Snake Witch’ is perhaps not the place to speculate on a normal life as Darin Hlavaz sends his unlikely companions up the river C’Naa. The wizard and the youth are getting to know each other and who knows where that will lead? Green-eyed Uryell is on his way to the Grafanox and Shilnof the shapeless one is overly interested. With a little nod to Jack Vance and a huge hello to Michael Moorcock

‘The Rains of Barafonn’ is a thoughtful and poignant offering reminiscent of the great days of dystopian fantasy.

‘The Foliage’ by Rab Foster is a well-conceived tale with echoes of sleeping beauty, but only echoes. When a witch, her acolyte, three fleshers, a gravedigger and an old Town Guardsman enter a forest to see why half the village has disappeared expect the answer to be magical in nature. Foster’s one weakness is that occasionally he explains rather than shows but this does not detract from the tale and is counterbalanced by some gems in dialogue which made me laugh out loud – a rare event. The most appealing aspect of this tale is Foster’s depiction of the characters and particularly Gudruun, who is a witch you’d definitely like to encounter.

‘In the Lair of the Moonmen’ by John Hansen starts with our hero Varkez crawling on his belly towards the frog king. Wonderful stuff told with a dry and insouciant wit. There is just a hint of a minor Burroughsian warrior on the lines of A Fighting Man of Mars with Hansen’s shackled princesses and impossible skychariots. The story is long, I would regard it as a novelette, but reads so comfortably I look forward to a novel. Very nice indeed.

We finish with Adrian Cole, another novelette entitled ‘Sailing on the Thieves’ Tide’, a tale of Elak of Atlantis. Lycon is boozing in the local tavern where he meets with an old pal. Talk turns to sea battles, magic, druids and the Dragon Throne which the young and popular King Elak has designs upon. The problem, simple enough, is that it just can’t be moved. Lycon’s old pal has uncovered a map, so what can go wrong? Tell that to the wise old druid as King Elak makes some impetuous, foolhardy and irresponsible decisions to seek out some rather peculiar bones – and that is how adventures begin.

CH: Yes, indeed. Jim Pitts rounds off the entertainment with his best cover in the series and some neat internal illustrations which lend a classy feel to the production.

PM: It’s always nice to chat, Craig. Before we wrap things up, could you leave us with your final thoughts on the book overall?

CH: I enjoyed the first Swords & Sorceries and I enjoyed this one more. Despite a wide variety of talented authors with a wide variety of treatments and content there is a distinctly themed feel to this anthology. Harking to the past glories of fantasy, it doesn’t let the modern reader down at any moment and it is simply a fun read.

To buy Phantasmagoria follow this link: amazon.co.uk
Posted by David A. Riley at 17:15