A Grim God's Revenge reviewed in the latest issue of Phantasmagoria 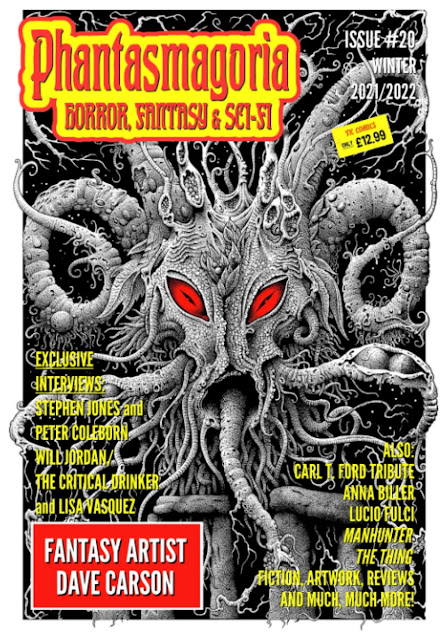 There is a detailed review of my collection A Grim God's Revenge in the latest issue of Phantasmagoria magazine by Trevor Kennedy:

THIS LATEST COLLECTION of 14 stories by David A. Riley is a broad, wide-ranging selection that branches out into horror, fantasy and science fiction, with some gritty realism thrown into the mix for good measure.
As the tagline states, “Dark Tales of Fantasy & Horror”, there is a bleak, hard edge to the author’s work overall, many of his tales very much set in the real world, one that involves murder, vengeance and Satanic cults weaved into the very fabric of their “It’s grim up North” British setting. Personally, I’ve always been attracted to this type of “kitchen sink” style of neorealism, in both literature and film, and if there’s some supernatural horrors thrown in there too, then all the better. 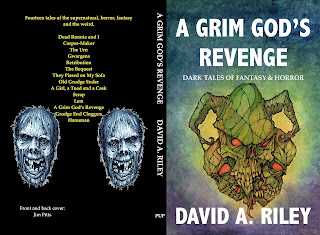 Quite a few of the tales are set in the author’s regular fictional locale of Grudge End in the town of Edgebottom, “Lancashire’s shame”, a part of the world with a very dark history where some nasty stuff indeed has happened over the decades. These are my favourite types of tales by Riley and definitely those which I consider to be his strongest. The Edgebottom-set stories included here include ‘Grudge End Cloggers’ and the excellent ‘Scrap’.
Additionally, there is also a raw and authentic tone to the delightfully titled ‘They Pissed on My Sofa’, concerning the vengeance of a harassed man against a bunch of young hooligans.
The collection is certainly not all in this style and tone throughout though, as Riley also gives us some good old-fashioned swords and sorcery-esque fantasy with the likes of the title story, ‘Retribution’ and ‘A Girl, a Toad and a Cask’. ‘Gwargens’ is a splendidly enjoyable sci-fi yarn.
Looking at some of the other stories featured, the opener, ‘Dead Ronnie and I’, is set during a zombie apocalypse and in part on a deserted island, ‘The Urn’ feels M.R. Jamesian in terms of style and content, while Jewish and Indian mythologies are explored in ‘Lem’ and ‘Hanuman’.
With a beautifully vivid front cover artwork by Jim Pitts, A Grim God’s Revenge is an interesting and nice blend of some of Riley’s tales covering a period of almost half a century since their original publications.
If you’re a fan of more edgy horror then this is one for you, with the other types of stories splitting things up well and lending something of a multifarious mix to proceedings.
A Grim God’s Revenge is published by Parallel Universe Publications and is available to purchase from their website, Amazon and other outlets. For more information please go to paralleluniversepublications.blogspot.com.
—Trevor Kennedy

To buy A Grim God's Revenge: