My review of Beyond the Curtain: Uncanny Tales of the Theatre by L. H. Maynard 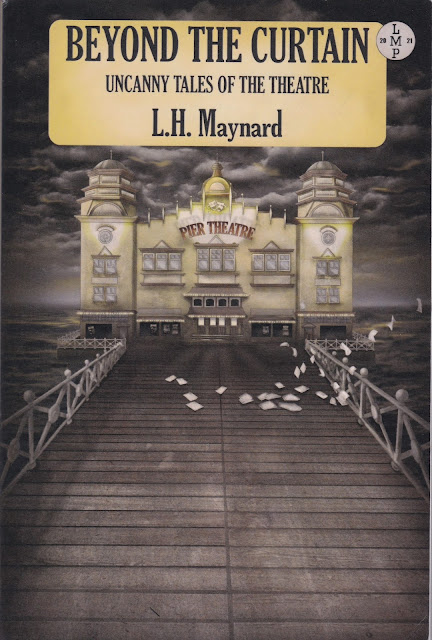 BEYOND THE CURTAIN: UNCANNY TALES OF THE THEATRE by L. H. Maynard

This is the first collection of stories by L. H. Maynard I have ever read. I am unfamiliar with his name, though his stories are so well-written I am surprised I haven’t come across him before. In his introduction he says that he has been writing for over fifty years.

Beyond the Curtain contains five stories: “The Business of Barbarians”, “At the End of the Pier”, “Another Bite of the Cherry”, “An Office in the Grays Inn Road”, and “Double Act”, the last of which is possibly my favourite, bringing the collection to a satisfying if sad conclusion.

Set in an extremely well realised 1950s or early 1960s, these tales of the supernatural are centred around theatres and theatrical life, from struggling young actors, down-at-heel theatre managers, unscrupulous “big names”, theatrical agents to comedy duos, many of which used to tread the boards in those far off days, grittily depicting poor digs run by eccentric landladies and rundown piers in even more rundown seaside resorts. Maynard gives me the impression he has had a more than passing acquaintance with that world – and has researched it well, filling his tales with numerous references to stars of that bygone time: Arthur Askey, Max Wall, Max Bygraves, Bob Monkhouse, Galton and Simpson, and Eric Sykes. And no shortage of other details that set the timeframe to perfection without being pedantic.

Maynard has a leisurely style which I found easy to read and which helped to develop not only the characters of his protagonists but also the world in which they lived, giving the stories a bleak kitchen sink air of reality. Several times I was reminded of that Olivier movie The Entertainer with his opportunistic womanising comedian Archie Rice. Rice would have fitted so well into many of these tales!

I became so engrossed in these stories, especially their build up, that I almost regretted it when the supernatural element began to emerge. Not that these are not splendidly conceived – nor for the faint-hearted!

These are, in the main, dark tales, vividly detailed and flowingly written. And I enjoyed every one of them.

Beyond the Curtain: Uncanny Tales of the Theatre is available from amazon. And at only £6.99 is a definite bargain.

This review was first published in Phantasmagoria magazine.