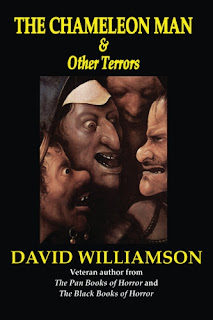 Kindle versions of David Williamson's The Chameleon Man & Other Terrors are now available.

Contents are:
The Procedure
The Scryer
No Room at the Flat
The Sandman
The Too Good Samaritan
The Not So Good Samaritan
The Chameleon Man
The Switch
Rest in Pieces
Ashes to Ashes
Blind Date
Herbert Manning's Psychic Circus
The Boy
Ten Weeks
Din-Dins for Binky
A Reflection of the Times
And the Dead Shall Speak
Boys will be Boys
A Night to Remember
A Problem Shared

David Williamson has been writing horror stories for many years, and was first published in the prestigious Pan Book of Horror series, where he had a tale in number 28. This was followed by a further three stories in Pan number 30 which, sadly, turned out to be the last of that great series. It was not until he was contacted by Johnny Mains, a walking encyclopaedia in the field of Pan Horror and its authors, that his passion for writing horror was once more re-kindled, and Johnny introduced him to Charles Black, the editor of The Black Book of Horror. Since then, David has been a regular contributor to the wonderful Black Books series,  alongside many other well known authors both from the Pan era and more recent times. He has also appeared in several other anthologies from publishers such as Hersham Horror, Gray Friar Press and Hazardous Press.
He lives in West Sussex near the sea.
Posted by David A. Riley at 10:08