Back in the very early 70s before he became a professional editor with Sphere Books' New Writings in Horror and the Supernarural volumes 1 and 2, Dave Sutton published Weird Window, which showcased new stories by a variety of writers like Robert J. Curran, Keith A. Walker, Alan Moore, Edward P. Bergland, Eddy C. Bertin, Gregory Francis, Alan Jones, and Colin Lee, as well as a couple of stories of mine, one of which ended up in The Year's Best Horror Stories 1 edited by Richard Davis (Sphere Books, UK and DAW Books USA).

Weird Window only ran for two issues. I provided the artwork for the cover of the second issue, plus a story, Corpse-Maker. Other stories in this issue were The Dog by Robert J. Curran, The Haunting of Edward Latimer by Keith A. Walker, Shrine of the Lizard by Alan Moore, and Homecoming by Edward P. Berglund. 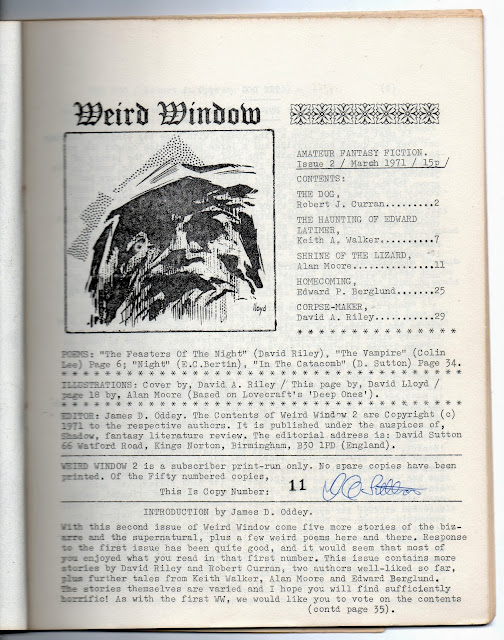