The Casebook of Eddie Brewer 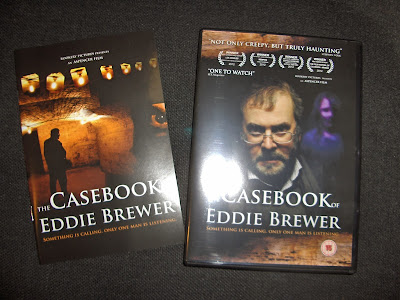 Eddie Brewer (Ian Brooker) is a one man psychic investigator who has a regular spot on the local radio station, spending his days travelling from place to place to check everything from inexplicable bumps from an adjoining empty house to the malevolent activities of what could be a poltergeist.
When the story starts Eddie is  accompanied by a film unit doing a documentary about him.
The unit follows Eddie as he visits a mother whose young daughter, a strange, sometimes sinister little girl, may be responsible for poltergeist activities in their home, aided by an invisible "friend" she calls Mr Grimaldi, an eighteenth century clown. Next Eddie visits a rundown mansion which the local council is renovating, some of whose offices are already there, though there doesn't appear to be more than a handful of people working in the building yet. Old coins seem to appear from nowhere in the building's cellars and Eddie, while inspecting them by himself, glimpses what he only realises later must have been the ghost of a woman. From now on odd things begin to occur more frequently, culminating in a sort of Most Haunted visit by a film crew,  a psychic medium (obviously mimicking the dafter aspects of Derek Acorah), a hostile academic skeptic, and Eddie. With a mixture of normal and handheld cameras reminiscent of The Blair Witch, the film retains a semi-documentary realism, using minimal special effects. As the night progresses members of the cast and crew panic at inexplicable events inside the cellars, with the psychic medium falling into a fit induced by some sort of diabolic possession.
Excellent naturalistic acting and a story that never reveals too much - or offers any comforting explanations - help to build an atmosphere of supernatural dread. Eddie, our nominal hero, is disturbingly and all too obviously vulnerable, with no easy solutions to offer anyone for what is happening, And, indeed, in the aftermath, it is clear he too can become a victim of supernatural enmity as easily as anyone else. The final words in the film, when you think everything is finally over, will chill you, when it becomes obvious that what has happened so far is only the beginning for Eddie.
An excellent film, that is both engrossing and disturbing. What more can you ask than that?