Sometimes you come across a film that is incredibly realistic but as whacky as hell - and they don't come much more realistic or as whacky as Frankenstein's Army. Filmed on the dreaded hand held camera, this technique works for the most part here because it's in the hands of a cameraman in the Red Army during the closing months of the Second World War. Ostensibly there to make a propaganda movie for Comrade Stalin, there is more to this than meets the eye. The small group, fighting their way forwards against the retreating German Army stumble across a factory whose huge underground cellars house a frightful secret: the redoubt of mad scientist Dr Victor Frankenstein, recruited by the Nazis to create a monstrous army of the dead to fight the Russians. Not only does he reanimate patched up corpses, though. He goes one stage further - and creates an even more nightmarish concept of bodies welded to a bizarre range of bladed weapons, including chainsaws. 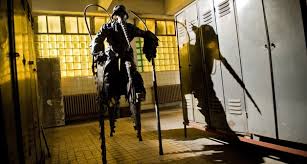 The Russian soldiers are brilliantly depicted, with some outstanding performances by the actors, so that they come over as real people, however insane everything else becomes. And the insanity of the place they are trapped in is remarkable, with flickering lights, grotesque machines within grotto-like concrete passages through cellars that lead to rooms filled with body-parts, gruesome surgeries and homicidal mash-ups between men and machines.

I must admit I have never seen anything like this before. Yet, for all its craziness, it works. As does the plot, where there are plots within plots, culminating in a final twist at the end. Even the hand held camera works, lending an even more nightmarish touch at times. Recommended - though not for the faint at heart.