I'm currently reading the Tartarus Press edition of Sub Rosa by Robert Aickman, which I picked up at a discount at the Halifax Ghost Story Festival.
Although I have always liked a couple of Aickman's stories in the past, I don't think I have ever given him a fair crack of the whip, perhaps because I expected the wrong things from him. He is not a horror story writer, nor does he write straight ghost stories. He is definitely something unique and perhaps a classification all to himself.
I would add, also, he is not someone you can breeze through. To appreciate his stories, they have to be read slowly and carefully.
Anyway, I must admit to having enjoyed what I have read so far and will do a more detailed write-up on the book later. I have just read Never Visit Venice, which is very evocative of that strangely atmospheric, decaying city, about which several writers have written outstanding stories, including Daphne du Maurier and David Sutton. This is both, obliquely, a ghost story, with tinges of horror, but many more emotions too, including a kind of sadness.
I am just about to embark on The Cicerones. I watched a short film adapted from it at Halifax, starring Mark Gatiss and directed by Jeremy Dyson, who read one of Aickman's stories at the festival. I believe the original is much better than the film, though that had its moments. 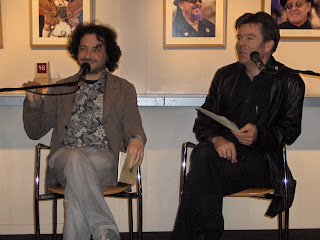