Dramas from the Depths - Reggie Oliver

Still waiting for this book, though I know it's on its way to me from the publishers, Centipede Press in the States. It includes the stories from Reggie Oliver's first two collections, published by Haunted River Press and, I believe, from his Ash-Tree Press collection as well. I have all of these, but I must admit I couldn't resist the idea of this deluxe edition, which weighs in at just under six pounds. 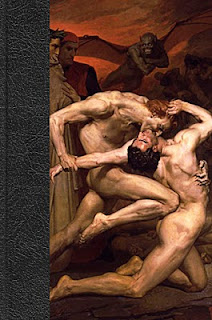 Centipede Press
Reggie Oliver has some interesting comments to make about this rather striking cover on the All Hallows Message Board: "Re the cover art, now it can be told. The first two covers that were suggested to me frankly astounded me. They looked like the collaboration of Salvador Dali and Walt Disney on a day when both had drunk too deeply of the blushful Hippocrene the night before. I tactfully suggested that this might convey a false impression of the contents. I then suggested a detail from a Poussin of a man running away from a snake which actually comes in one of the stories (The Man in the Grey Bedroom, Masques of Satan). I also suggested a crepuscular Atkinson Grimshaw. Both received dusty responses and I was sent more Salvador Disneys. Eventually the Bouguereau of violent homoeroticism in Hell was suggested. (Was his name really Buggereau) I thought it was effective and consented. But I can sympathise with James's point of view. R.O."
Posted by David A. Riley at 21:16