My review of The Revenant of Thraxton Hall by Vaughan Entwistle 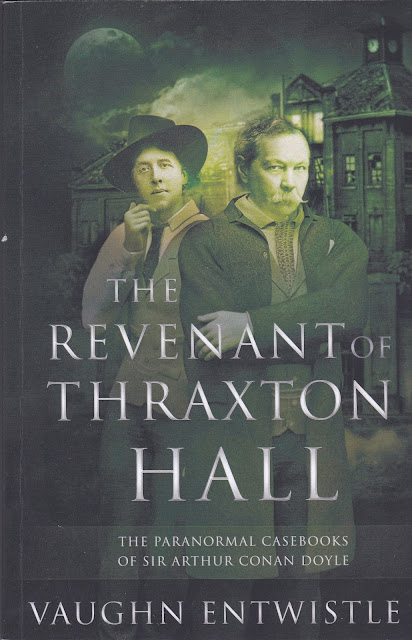 THE REVENANT OF THRAXTON HALL: The Paranormal Casebooks of Sir Arthur Conan Doyle by Vaughn Entwistle

Revenant: In folklore, a revenant is an animated corpse that is believed to have revived from death to haunt the living. The word revenant is derived from the Old French word, revenant, the "returning".

A more disparate pair of collaborators it would be hard to imagine than Sir Arthur Conan Doyle and Oscar Wilde, yet Vaughn Entwistle accomplishes this in The Revenant of Thraxton Hall with remarkable skill, name-dropping on the way other notables from that era in a complex novel of supernatural intrigue. And, yes, despite there being some all too human malefactors involved in this tale, the supernatural has a malignant and all-important presence.

It is 1893 and The Strand has just published The Adventure of the Final Problem, in which Sherlock Holmes brings about the death of Professor Moriarty at the cost of his own life. Thus putting an end, so far as Doyle is concerned, to the Holmes stories, which, despite the wealth and success they have brought him, he has grown completely weary. But by doing this he has suddenly made himself the most hated man in London, as crowds of outraged Holmes devotees demonstrate outside the magazine’s offices, shouting their anger at the death of their hero. Doyle has other problems to deal with though: his wife Louisa is slowly dying of tuberculosis, and for all his medical knowledge he can do nothing to save her. It is now, like something out of one of his Holmes stories, that a mysterious letter arrives asking for his help.

Through a series of convincingly elaborate circumstances, it is not long before Doyle and his close friend Oscar Wilde embark on a train to Lancashire to stay at Thraxton Hall, where the newly created Society for Psychical Research will be holding a series of investigations. Thraxton Hall is owned by Lady Hope Thraxton, who though young has an affliction which makes sunlight deadly for her and must remain sheltered from it. Her family has a morbid history of murder and witchcraft and a curse which looks to culminate soon in her violent death.

This complex novel is splendidly fast moving with some sparkling dialogue, some of which, especially between Doyle and Wilde actually made me chuckle out loud! Not that this humour doesn’t share space with some well-written horror, especially in the decaying edifice of Thraxton Hall, a memorable haunted house, replete with secret rooms and hidden passageways and a huge, mouldering, partially flooded crypt. And a blind butler!

It never lets you down and remains engrossing right to the final page, with characters that leap full-fleshed from the page.

Vaughn Entwistle has written another “paranormal casebook” of Conan Doyle, again accompanied by Oscar Wilde, The Dead Assassin. Having enjoyed reading The Revenant of Thraxton Hall I will most definitely be ordering this, as well as another historical novel, Hideous Progeny, which is about Mary Shelley and “her monster”! I can see me spending quite some time over the next few months acquainting myself with these and other books by Vaughn Entwistle, a writer I am glad to have discovered at last.

This review was published in Phantasmagoria #19 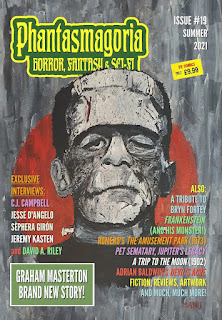