The Color Out of Space - the movie 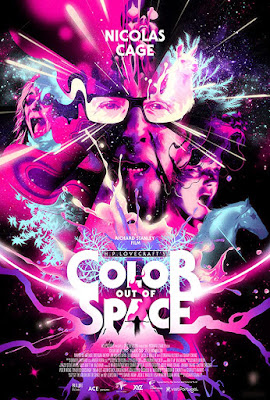 I suppose I should say something about the blu-ray copy of The Colour Out of Space starring Nicolas Cage that I said I had ordered a few days ago.
As an adaptation of a Lovecraft story it wasn't the worst I have ever seen (The Dunwich Horror from 1970 starring Sandra Dee and Dean Stockwell still holds that dubious trophy). But apart from its opening sequences where the narrator actually quotes some lines from Lovecraft, describing the country west of Arkham, etc., there is very little that could be described as Lovecraftian in the film, and whoever wrote the screenplay missed umpteen opportunities to use scenes from the story to great effect, instead, as usual, going their own way with their own narrative.
The farm in the film struck me immediately as wrong, It wasn't so much a farm as a mansion. And why the lamas? Instead of a long established farmstead with local people, we had out of towners who were trying to get away from the rat race, a cliche that's getting staler by the film. Okay, so the farm once belonged to the main character's father, but none of the rest of his family were anything but townies who hated being where they now were from the very beginning, even before the meterorite crashed onto their land and things start to go strange. Unfortunately, even when this happens, I was given the impression that whoever wrote the screenplay didn't really know what to do with the story, interposing some rather naff horror scenes, like someone "accidentally" chopping off some of their fingers while preparing a meal! And then spending only one night in hospital where, we are told, surgery went well!
Not much tension, not much character empathy either, with the usual "rebellious" teenage daughter. A missed opportunity, so much so that, unlike the earlier version starring Boris Karloff (Die, Monster, Die!) I doubt I will feel inclined to watch it again. 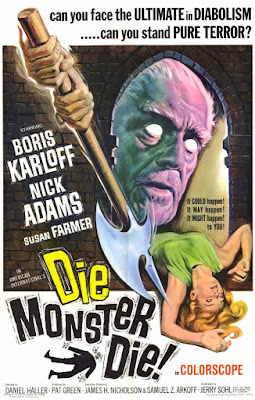 Email ThisBlogThis!Share to TwitterShare to FacebookShare to Pinterest
Labels: Die, Die!, films reviews, Monster, The Color Out of Space