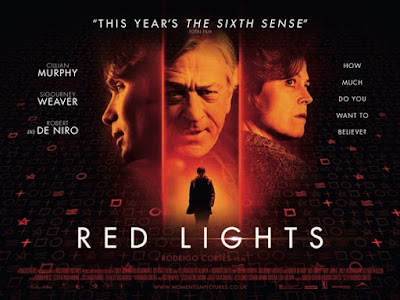 Watched Red Lights, starring Sigourney Weaver and Robert De Niro on Friday night.
The film has a great cast, besides the ones mentioned above, but is such a waste of all the talent in it, perhaps because the writer/director hadn't a clue about the word subtlety. De Niro's performance was pretty bad too, I must admit, with too much OTT acting, though it would be hard to match Cillian Murphy who shouts too much at everyone, and there is one particular scene where his character attacks, humiliates and bullies his department boss, Toby Jones (who is quite a bit smaller than him) in front of witnesses - and without repercussions. It came over as a nasty piece of arrogant bullying, unjustified by anything that had happened. My credibility in the film, already fairly well stretched, passed breaking point after this. In no real world would something like that either be justified or tolerated, either by the man subjected to it or by any of the witnesses. Just one example of a stupid script that wasted what could have been an interesting concenpt.
Not recommended at all.
Posted by David A. Riley at 16:36