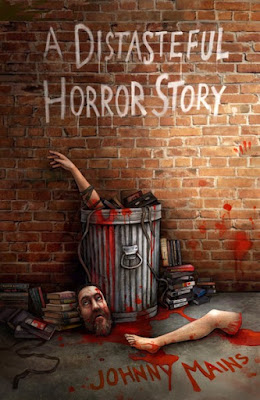 A Distasteful Horror Story by Johnny Mains is now available to order on amazon, price £11.99.

"A darkly humorous, satirical look at the tight-knit world of horror writers - and their fans. Contains no scenes of violence against actual books, only their authors”Johnny Mains has been prominent in the horror genre ever since his 2010 debut anthology, Back from the Dead: The Legacy of the Pan Book of Horror Stories, which won the British Fantasy Award in 2011 for best anthology. Mains has been at the forefront of the UK’s new wave of horror, editing Best British Horror (Salt Publishing and NewCon Press), Dead Funny: Horror Stories by Comedians (edited with Robin Ince), and The Screaming Book of Horror.Mains has also written several collections of his own stories: With Deepest Sympathy (2010), Frightfully Cosy and Mild Stories for Nervous Types (2012) and A Little Light Screaming (2015).Mains has also written the introduction to Stephen King’s 30th anniversary edition of Thinner, and has discovered ‘lost’ works of fiction by Algernon Blackwood, Edith Nesbit and Daphne Du Maurier.
"Johnny Mains is the Herbert van Thal of our age" - The Independent
"Mains' knowledge of fantastical fiction is enormous" - Robin Ince
"Mains is the Minister For Horror" - Charlie Higson"