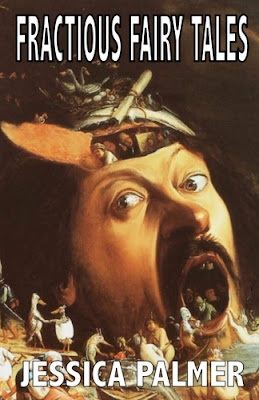 As a promotion Parallel Universe Publications have reduced the price of downloading the kindle version of Jessica Palmer's Fractious Fairty Tales to 99p ($1.26 in the States).

What one reviewer thought of Fractious Fairy Tales:

"Terry Pratchett was renowned for taking familiar tales and converting them into comforting metaphors in the Discworld. That is not the way of Jessica Palmer.
Rather, she takes the crumbling skeletons of childhood fairy stories and fleshes them with satirical icons from the modern world to create a universe that is not Grimm but GRIM.
An author with many genres to her credit, from teen fantasy, through textbooks and cultural analysis. But this collection has more in common with her early horror work, twisted with a warped sense of humour that befits the daughter of a clown.
As with her other recent collection, "Other Visions of Heaven and Hell", you should leave your preconceptions on the coffee table. You will not, and could not, have anticipated this. But you will enjoy it, mostly!" 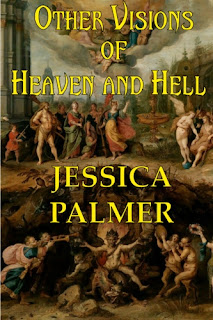 Also take a look at Jessica Palmer's Other Visions of Heaven and Hell.

Jessica Palmer has had 28 books published, both fiction and nonfiction. Her novels – horror, fantasy and science fiction – were released by Pocket Books in the United States and Scholastic in the United Kingdom. She has written two textbooks about Native American history, which were published by McFarland, and an encyclopedia of natural history released by Harper Collins’ label Element Books and later by Thorson in the UK.

Jessica has also written ten science-and-technology manuals on the topics of explosives and radiation. These were distributed globally. It was this work that brought her to Great Britain in 1988.

The daughter of a professional clown, Jessica refers to her switch to writing fiction as an exercise in damage limitation. She taught classes and conducted workshops on creative writing and publishing at North Shropshire College in Whitchurch, Stanmore College and the Islington Arts Factory in London.

As a journalist, Jessica won awards in New Mexico and Texas for writing features, public service and breaking news – the most recent in 2013. Jessica has also written satirical columns for newspapers, including “A Slice of Life” and “How to Make Love to your Personal Computer.”

Her two loves are writing and animals. She started a nonprofit in Kansas for wildlife rescue and has held a wildlife rehabilitation permit since 2002.

Order Direct from us