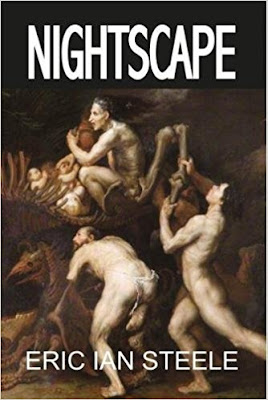 We are pleased to announce that copies of our latest hardcover book, Eric Ian Steele's brilliant collection of stories, Nightscape, is now available.

Eric Ian Steele is a novelist and screenwriter from Manchester, England. He is the writer of the horror novel The Autumn Man, as well as the thriller feature film The Student (2017) and the action/sci-fi feature film Clone Hunter (2010). He won the prestigious Writers on the Storm screenwriting contest in 2012 and has had short films produced across the USA. He has also written for hire on a children’s sci-fi animated TV series. His short stories range from science-fiction to horror and fantasy and can be found in numerous anthologies and magazines including Terror Tales alongside fiction by Neil Gaiman and Kim Newman, The Lovecraft E-Zine, Horror Without Victims, the superhero fiction anthology POW!erful Tales, and the zombie poetry collection Vicious Verses and Reanimated Rhymes!
Posted by David A. Riley at 20:53