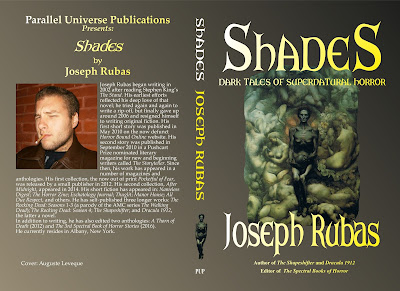 Shades: Dark Tales of Supernatural Horror by Joseph Rubas is to be published by Parallel Universe Publications on the 7th January, 2017 - our first book of the New Year.

Joseph Rubas began writing in 2002 after reading Stephen King’s The Stand. His earliest efforts reflected his deep love of that novel; he tried again and again to write a rip-off, but finally gave up around 2006 and resigned himself to writing original fiction. His first short story was published in May 2010 on the now defunct Horror Bound Online website. His second story was published in September 2010 in a Pushcart Prize nominated literary magazine for new and beginning writers called The Storyteller. Since then, his work has appeared in a number of magazines and anthologies. His first collection, the now out of print Pocketful of Fear, was released by a small publisher in 2012. His second collection, After Midnight, appeared in 2014. His short fiction has appeared in: Nameless Digest; The Horror Zine; Eschatology Journal; Thuglit; Manor House; All Due Respect, and others. He has self-published three longer works: The Rocking Dead: Seasons 1-3 (a parody of the AMC series The Walking Dead); The Rocking Dead: Season 4; The Shapeshifter; and Dracula 1912, the latter a novel.
In addition to writing, he has also edited two anthologies: A Thorn of Death (2012) and The 3rd Spectral Book of Horror Stories (2016).
He currently resides in Albany, New York.
The collection includes:
Passing the Buck
Midnight
Aokigahara
Snowbound
Deja Vu
The Ghostly Hitchhiker
Just a Mask
Meeting Ray Bradbury
5051 Bartley Square
The Witching Hour
Potter's Field
The Warlock
Confessional
The Thing in the Woods
The Lake House
Chomo
The Traveling Show of 2016
Evildoer
A Perfect Life
Fury
Paint
Night of the Dog
Posted by David A. Riley at 19:32