Their Cramped Dark World assessed on The Horror Review

Their Cramped Dark World received a glowing assessment on The Horror Review. 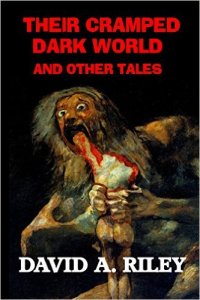 Their Cramped Dark World & Other Tales
David A. Riley
Parallel Universe Publications
April 13, 2015
Reviewed by Chris Saunders
David A. Riley has been around a long time. The oldest stories in this, his third collection, were first published in the early seventies. Not that you would know it just by reading them. For the most part, stories over forty years old slot in seamlessly with comparatively new ones, each benefiting from the same quintessentially English feel and underlying creepiness.
“Hoody” kicks things off, the beguiling tale of a man being haunted by the ghost of a murder victim. Or is he?
This is followed by my favourite story in this collection, which first appeared in the near-legendary small press title Peeping Tom back in 1996. “No Sense in Being Hungry, she Thought,” is about some alarmingly rough justice being administered to a serial rapist; while yet another stand-out is “Now and Forever More,” about a couple who find themselves in a very strange little town buried deep in the English countryside. The tale is reminiscent of The Wicker Man (the original 1973 Edward Woodward version, not the sub-standard 2006 Nicholas Cage effort, though the plot is essentially the same) but somehow manages to be even creepier.
“Romero’s Children,” as the title suggests, is a homage to classic zombie movies, while “Swan Song” is an unsettling little yarn about a trio of aging bullies who get more than they bargained for when trying to avenge a perceived sleight.
As is the norm with most single-author collections, Their Cramped Dark World & Other Tales is a little uneven in places, and some stories have stood the test of time better than others but all in all, this is a rocking good read.
Hat’s off, Mr Riley.
Posted by David A. Riley at 13:19