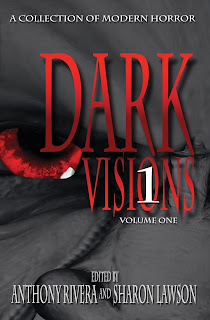 My story Scrap in Dark Visions 1 seems to have got more positive reviews than any story I've written for a while. What pleases me more than anything is that I put a lot of heart and soul into this story, which I think is one of the best I have ever done.

A brief description of it on the Grey Matter Press website:

Scrap by David A. Riley
Childhood should be a time for leisurely days spent playing in the sun. But for two abused brothers coming to grips with life on their new English estate, a day of adventure opens the door into a world of evil and sets in motion a chain of events from which there seems little hope of escape.


From one reviewer on Amazon:

"could easily have been a kitchen sink drama, depicting the lives of two brothers growing up in a poverty-stricken council estate in England", adding "Riley chooses to inject a healthy dose of horror, elevating his story to a different, altogether more gruesome level."

"David A. Riley's "Scrap" had a gritty cinematic feel - the story of two down-and-out brothers looking for scrap metal to steal and sell, until they venture into a part of town best left untouched."

"David A. Riley’s “Scrap,” concerns two brothers living in England who have been abused at the hands of those who should be caring for them. What they see as a new opportunity to turn their lives around turns out to be anything but. David lures readers into the plot and shocks with the greatest of ease."

From The Horror News Network:

"SCRAP by David A. Riley is in my top two for this collection. It's just so, so good. It's sad and terrifying and just very well written. I would like to read more of Riley's work as well. It seems the words and the stories come easy to him."
Posted by David A. Riley at 09:24