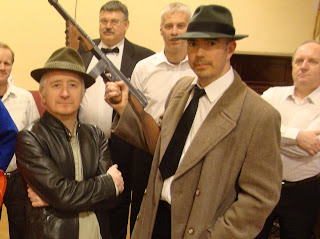 A photo of some of the cast in the Oswaldtwistle Players production of The Resistible Rise of Arturo Ui, which starts this coming Wednesday for four nights at the Civic Theatre, Oswaldtwistle.

Front left is Paul McGowan who plays Ui. Next to him, with the machine gun, is Chris Knight, our producer. I'm stood just behind him at the edge of the photo, arms folded and looking as grim as I can manage as a gangster bodyguard. Our first dress rehearsal is Sunday at the theatre.