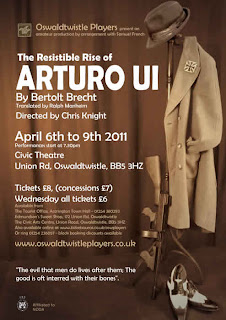 We had another good rehearsal last night. We have started to use some of the blank firing handguns that will be used in the production to get us used to the noise - they really do go off with a hell of a bang. And, even though you know they are only firing blanks, it's still a bit unnerving to have one pointed at you at close range, knowing it's going to be fired.

Lin was asked to make 26 Nazi-style armbands (with the letters UI instead of a swastika) and 4 fourteen-foot banners for the stage for a Nuremberg-like finale. The armbands are finished and three of the banners only need the large white circles with the letters UI sewing onto the red matrerial. I took one of the banners to the rehearsal. It looked pretty good when it was stretched out in the hall.

We had some photos taken last night. I had to sit in my gangster-bodyguard role with a fake machine gun resting on one knee, looking mean!
Posted by David A. Riley at 08:18