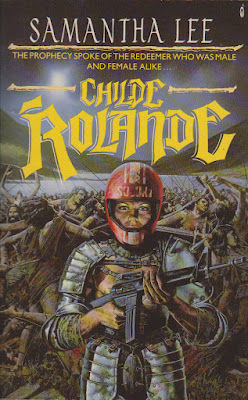 This is my previously unpublished review of Childe Rolande by Samantha Lee:

Although this dark fantasy novel of a post-apocalyptic Scotland was published thirty years ago, it reads as fresh today, with issues that are just as pertinent now as they were in the 1980s.

Most of the story is told in the first person by Rolande her-or-himself. I say her-or-himself because, in the woman-dominating culture that rules Scotland in this future time, Rolande is that rarest of beings, a hermaphrodite, having both the genitals of a man and a woman. As only a handful of drugged, caged and pampered males are allowed to live intact as “breed beasts” in the Scotland of this story,  the dwarf Morangy, a eunuch as well as chief “healer” in the royal household, steals Rolande away and puts her in the care of a renegade male known as the prophet. Morangy realises that Rolande could be the fulfilment of a prophecy that a hermaphrodite will one day rise to become “the Redeemer”, who will end the vicious tyranny of the female rulers of Alba and restore equality between the sexes.

Rolande’s story becomes ever more complex as she grows older, especially after, as part of a travelling band of entertainers, she catches the romantic attention of the Maxwell, Chief Warlord of the Clans of Alba (Scotland), which results in her being brought into the royal household where she meets her twin sister, though neither know of their relationship yet or even that the other existed, as the events of Rolande’s birth were a secret known only to a few.

This is a complex novel, with some strongly delineated characters, and some of the fiercest violence and graphically described tortures and executions I have ever read, perhaps expected from a veteran writer of the Pan Books of Horror. Over and above this, though, it is an epic saga of a struggle to end a repressive tyranny, with perhaps one of the blackest, most evil villains I have come across in the form of the mad sorceress and high priestess, Fergael, who becomes uglier and psychotically more dangerous as time goes on. There is magic too of the darkest sort and the occasional monster, though both occur sparingly and are all the more credibly dramatic for it.

An excellent novel and one I would recommend unreservedly for anyone who loves the darkest of fantasies in a post-apocalyptic future - and a damn good story too.